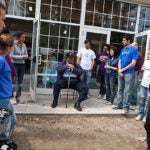 Call it the American fantasy. For years, people have believed that a college degree provided the only safe path to achieving middle-class security and a stable career, and the nation’s high schools have been shaped to fit the idea that all young people could and should go to college.

The facts tell a different story: Only three in 10 young people earn a bachelor’s degree by their mid-20s, while more than 40 percent never even set foot on a community college or university campus. For the majority of young people who never earn a post-secondary degree, the American dream remains just that.

The problem, three Harvard analysts say in a new report called “Pathways to Prosperity,” is that high schools don’t offer alternatives that prepare students to enter the working world, rather than four more years in a classroom. And while the new public education system they’re advocating — one that offers robust vocational and technical training programs alongside traditional college-prep schools — is a long way from broad reality, their vision is inspiring debate.

“What we’re trying to do is cast a searchlight on the problem,” said Robert Schwartz, the Francis Keppel Professor of Practice of Educational Policy and Administration and faculty dean of the Harvard Graduate School of Education (HGSE), who spent three years working on the report with Ron Ferguson, senior lecturer in education and public policy at the HGSE and the Harvard Kennedy School (HKS), and Bill Symonds, a former BusinessWeek education reporter who now runs the Pathways to Prosperity Project at HSGE.

“We’re trying to jump-start a more serious effort to bring together employers and educators from community colleges and high schools,” Schwartz said. “Employers in growing sectors are highly motivated to figure out how to get the workforce they need,” he said, “but there’s a huge social stigma attached to [vocational training] in America that we have to overcome.”

The report is nothing if not timely. The recession hit teenagers and young adults the hardest; the percentage of Americans under 25 who have jobs is at its lowest level since the Great Depression.

As part-time work dries up, the authors reason, students could benefit now more than ever from vocational training as part of the typical school day to learn the job skills they’ll need down the road.

According to the report, 30 percent of jobs created over the next decade will require “some college” short of a four-year degree. These positions, in such fields as health care or construction, can offer entry into the middle class for those who are trained to fill them. Just as high schools encourage students to consider college, the authors write, they should also help prepare their graduates to enter apprenticeships, certificate programs, or community colleges that can teach those job skills.

There are examples of vocational school success, as Symonds points out. In Massachusetts, students who attend vocational schools are now scoring higher on the MCAS and graduating at a higher rate than their peers in traditional high schools.

“These schools work because we didn’t create them as a second-best option,” he said. “Some of these schools have waiting lists.”

And of course, Europe has long made vocational training an option for students. American criticisms of the European system — namely, that it “tracks” students at a young age, based on their abilities — obscure the fact that it works, said Schwartz, who has worked with the Organization for Economic Cooperation and Development (OECD) on two studies comparing countries’ educational systems. European nations are outscoring America on international standardized tests, and employment rates for young people are higher.

“We’ve relied on one institution, our higher education system, to get kids from high school into the workplace,” Schwartz said. “These other countries have built a parallel system, and I would argue that’s something we should be paying attention to. We have no serious alternative strategy.”

Reactions to “Pathways,” which was released Feb. 1, have been mixed but rarely muted. A Washington Post education columnist called it “dreamy nonsense”; NPR’s “On Point” devoted an hour to the report.

“The first few emails I got were negative — people accusing us of trying to deny college to disadvantaged students,” Ferguson said. “That was quickly eclipsed by people really thanking us for raising the issue. The college-for-all movement has been so strong that people who think we need more than just college for all have been afraid to speak up.”

Symonds has received invitations from 18 states to address local school districts, community college presidents, state legislatures, and other groups, from as far away as Alaska and Hawaii.

Even the White House has paid attention. President Obama has long made improving community colleges, which provide the bulk of America’s technical training, a pillar of his higher education policy. But the administration is now considering the importance of career and technical education at the high-school level in preparing students for jobs.

Arne Duncan, Obama’s secretary of education, called the report “absolutely pressing,” and the newly formed White House Council for Community Solutions has asked for a briefing on “Pathways.” In fact, when President Obama came to Boston last month he made a visit to TechBoston Academy, a high-performing pilot school for at-risk students that offers its students vocational training for careers in technology.

But to Ferguson, director of the Achievement Gap Initiative at Harvard, promoting alternative educational paths is more than just smart policy. It should be a “social movement,” he said, to help students from all backgrounds succeed in work and life, especially poor minority students — a rapidly growing population that is most frequently left behind in traditional high schools.

“We’ve got to persuade people across society that unless we pay more attention to adolescence, we’re headed toward having a fragmented society that is divided by race and social class,” Ferguson said. “We don’t claim to know how to fix everything in the report. But we’re already in trouble, and if we don’t do something, things are only going to get worse.”