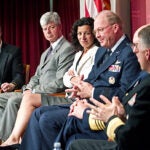 Patrick says system works, though costs are a challenge

Massachusetts Gov. Deval Patrick defended the state’s five-year-old health care reform Thursday (April 28), saying it has resulted in 98 percent of residents and 99.8 percent of children being covered by health insurance, and predicting that the state ultimately will figure out how to tame rising health care costs.

Patrick said the law has worked well in the short term but acknowledged that rising costs are a long-term concern. He pointed out that those rising costs are not a result of the reforms themselves, but are part of the broader picture of rising health costs nationwide. Even so, he said, he is proposing to harness those costs by better integrating care and emphasizing primary and preventative treatment.

“I believe Massachusetts will be the place where we crack the code on cost containment,” Patrick said.

Patrick made an hour-long appearance at The Forum at Harvard School of Public Health (HSPH). Webcast live, the event is part of a new effort by the School to reach broader audiences via the Internet on key health care topics. Previous forum sessions have examined the response to the Japan earthquake and tsunami, the potential of vitamin D to improve health, and the importance of mammograms in fighting breast cancer.

Patrick spoke for about 15 minutes and then fielded questions from the audience. His appearance was followed by a panel discussion featuring John Auerbach, Massachusetts public health commissioner, Hurmon Hamilton, president of the Greater Boston Interfaith Organization, Nancy Kane, HSPH professor of management, and John McDonough, director of HSPH’s Center for Public Health Leadership.

Patrick was introduced by Robert Blendon, professor of health policy and political analysis, who praised Patrick’s leadership during the recession and said that most of the criticism of Massachusetts’ health care reform comes from outside the state. Though there is concern about long-term costs, Blendon said, few people in Massachusetts are talking about repealing it.

In his remarks, Patrick cited several statistics that he said show the law is working. Seventy-six percent of employers now offer private health insurance to their employees, up from 70 percent before the reform passed. Costs to the state have increased by just 1 percent, while $300 million less is paid for health care for uninsured and underinsured patients.

“Health reform in Massachusetts is doing exactly what it is supposed to do,” Patrick said.

Businesses are facing the same problem, Patrick said, and such costs can be especially burdensome for small businesses just as the economy strengthens and they’re beginning to hire again.

Patrick said the answer may come from better-integrated programs and innovations being tried on a small scale in a number of places, citing community health centers, Atrius Health in eastern Massachusetts, and Blue Cross/Blue Shield’s alternative quality contract.

“There are many, many good things happening in the market now, but we need scale,” Patrick said.

Patrick expressed impatience with those who cite the system’s complexity as a reason for the lack of action on cost containment. Yes, the system is complex, he said, but it’s time to start taking steps to solve the problem. If everyone is committed to the same goal, he said, corrections can be made along the way that draw on lessons learned from experience.

“We do not have to have a perfect solution,” Patrick said. “We have to take a step and then stick together as we adjust.”

He urged the audience to support the effort and ignore the “overheated rhetoric” that is sure to come. Cooperation, collaboration, and a focus on shared goals will lead to success, Patrick said.

“We are moving. This is going to happen,” Patrick said. “We need everyone to contribute to get the best solution we can. We’re not going to let people drown in health care premium increases.”