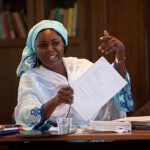 The human side of Shariah

South Asian nations long beset by problems that demand global attention — poverty, poor health, and unrest — are increasingly places where solutions are being developed and where technology enables innovation, according to panelists examining the region’s future.

The discussion Friday (April 8) came during a conference sponsored by the South Asia Initiative at Harvard University. Held in the Radcliffe Gymnasium, the two-day event featured key leaders from the region as well as several prominent Harvard officials, including President Drew Faust, Provost Steven E. Hyman, and deans of several graduate Schools.

In her opening remarks, Faust said Harvard has long had connections to the region, which is dominated by India and Pakistan, but which also includes Bangladesh, Nepal, Bhutan, Afghanistan, Sri Lanka, and the Maldives. In recent years, Harvard’s engagement has grown, as the region’s rising importance has attracted the attention of several professional Schools, including Harvard Business School (HBS), which has opened a research center in Mumbai.

Harvard has more than 100 faculty members whose work involves South Asia, Faust said, and Harvard students are increasingly choosing to work and travel there.

Faust praised the South Asia Initiative’s “dynamic and multidisciplinary approach” toward the region’s challenges. Initiative Director Tarun Khanna, the Jorge Paulo Lemann Professor at Harvard Business School, said the Harvard community has been very engaged over issues in the region, which he joked makes his job easier.

“All that we have to say is we’re going to provide food and get out of the way. The intellect and energy of Harvard takes over,” Khanna said, adding that the initiative is also a matchmaker between students with interests in the region and resources to help them pursue those interests.

Nohria said HBS seeks to have the largest intellectual footprint with the smallest physical footprint. The School’s engagement has included creating 120 cases that are shared with business schools there. The School also trains instructors from around the world, including South Asia, in the HBS case teaching method during workshops each summer.

Mostafavi said faculty and students from the GSD are examining the region’s rapid urbanization, whereby major cities are developing in short time periods. The growth is largely due to informal settlements, like slums and shantytowns, that have little infrastructure and for which traditional methods of urban planning fall short. Investigating these types of communities, Mostafavi said, is one way that the GSD can contribute to the region’s future.

Murray said there are opportunities to learn from South Asian technological advances. Tata Motors, for example, has developed the world’s cheapest car and may offer lessons for other automobile developers.

A panel on energy, technology, and innovation examined potential responses to challenges facing the region from climate change. R.K. Pachauri, chairman of the Intergovernmental Panel on Climate Change and director of the Yale University Climate and Energy Institute, said climate change presents many challenges to the region. Rising sea levels coupled with more intense and more frequent storms will affect densely populated, low-lying regions like those in Bangladesh. He suggested that surging waves and heavy rains will become more frequent, while melting glaciers will threaten drinking water for many in the region who rely on glacier-fed rivers.

“Where is the space in Bangladesh to which you can move?” asked Pachauri. “One is not talking about the entire coast becoming submerged. But major impacts from weather events, coastal flooding — these become increasingly severe as sea level rises.”

Pachauri, who was joined on the panel by former SEAS Dean Venkatesh Narayanamurti and Daniel Schrag, director of the Harvard University Center for the Environment, who chaired the panel, said the Indian national plan to fight climate change recognizes that the country’s development can’t follow the Western pattern. Innovation, he said, will be important in improving the lives of India’s poorest citizens.

One approach, aimed at the 400 million who don’t have access to electricity, uses a solar lantern program to provide lighting in rural areas. In the program, developed through the Energy and Resources Institute in New Delhi, lanterns are charged daily by a local entrepreneur who generates electricity through solar panels. They are then taken out by area residents each night, and are returned in the morning for recharging.

“You can’t minimize the importance of innovating for the poorest of the poor,” Pachauri said.