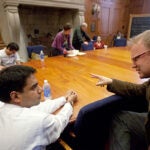 Harvard-affiliated scientists at Dana-Farber Cancer Institute have discovered new details of how cancer cells escape from tumor suppression mechanisms that normally prevent these damaged cells from multiplying. They also demonstrated a potential link between this cell proliferation control mechanism and the cognitive deficits caused by Down syndrome.

The findings add to a still-sparse understanding of how normal and cancerous cell growth is regulated and have potential implications for improved treatments, say the authors of a pair of articles in Genes & Development.

James A. DeCaprio of Dana-Farber said the results may provide new targets both for blocking the progress of cancer and perhaps for facilitating the growth of neurons in the developing brains of infants with Down syndrome.

DeCaprio, who is also an associate professor of medicine at Harvard Medical School (HMS), is the senior author, and Larisa Litovchick of Dana-Farber and HMS is the first author of one of the papers. They also are co-authors on the second article, whose senior author is HMS Professor of Medicine Nicholas Dyson of the Massachusetts General Hospital Cancer Center. In that report, the researchers revealed a previously unrecognized link between two cell-signaling pathways, called Rb and Hippo in scientific shorthand, that help regulate the formation of cells and organs during early development. Both pathways are frequently disrupted in cancer.

The life of a cell is defined by phases in which it grows, creates a duplicate set of chromosomes, and divides into two daughter cells — all governed by external signals such as growth-stimulating factors and internal “checkpoints.” Cells can also exit the growth cycle in two ways — becoming quiescent or inactive (which most of our cells are most of the time) until they re-enter the growth cycle, or senescent. Cells entering senescence are damaged or nearing the end of their lives, and ultimately die.

Cancer cells survive, in part, by ignoring signals to become senescent and continuing to make copies of themselves at will, or by entering a quiescent state from which they can be re-activated. Scientists don’t have a good understanding of how cells negotiate the molecular checkpoints that control these transitions.

“Our study identifies a molecular switch required for entry into quiescence and senescence,” said DeCaprio, whose laboratory group focuses on cell cycle regulation.

The gatekeeper to cell senescence and quiescence is a group of eight proteins that assemble themselves into the so-called DREAM complex, which helps cells exit the active cycle by turning off more than 800 growth-related genes.

A key player that triggers the assembly of the DREAM team is p130, a member of the Rb family of proteins. DeCaprio said the new research highlights p130’s underappreciated role in DREAM action.

“We have for the first time linked p130 itself to quiescence and senescence” — the latter contributing to cancer formation, said DeCaprio.

The report also for the first time reveals that a molecular switch, an enzyme called DYRK1A, performs a crucial step in assembling the p130-DREAM complex, and thus is a novel control point for quiescence and senescence. When DYRK1A is turned on, it acts through p130 to set in motion the assembly of DREAM, which turns off the growth genes and allows cells to depart the growth cycle and become quiescent or senescent.

DYRK1A’s ability to turn off cell growth genes may also be involved in the lower-than-normal development of brain neurons in Down syndrome, say the scientists, who are investigating possible new avenues to treating the disorder.

DeCaprio said this abnormal activity could explain both outcomes: DYRK1A-triggered DREAM formation could help suppress cancers by driving them into senescence, and also it would help reduce the generation of brain cells during development.

The second paper in Genes & Development describes a functional connection between the Hippo signaling pathway and the Rb pathway that contains DYRK1A. The researchers showed that a component of the Hippo pathway, a protein called LATS2, can activate DYRK1A.

The authors said that the LATS2 gene is located in an area frequently missing in cancer cells, suggesting that LATS2 might be a new control point for suppressing cancer cell growth.

Co-authors on the first paper, along with Litovchick and DeCaprio, are Laurence Florens, Selene Swanson, and Michael Washburn of the Stowers Institute for Biomedical Research in Kansas City, Mo. The research was funded by grants from the U.S. Public Health Service and the Department of Defense.

Authors on the second paper, in addition to Dyson, are first author Katrin Tschop of MGH Cancer Center; Andrew Conery and Ed Harlow of Harvard Medical School; Litovchick and DeCaprio of Dana-Farber; and Jeffrey Settlema of MGH Cancer Center. The research was funded by the National Institutes of Health.