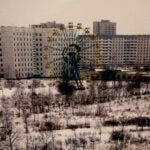 “You’re just like every toad I’ve ever met,” / said the Princess to her smooth companion. / “Except maybe more persistent,” she thought / quietly. “I’m still not sure why a person like me should bother with a totally slimy, / webfooted thing, when I’m so perfectly / content with my ball and myself.” “I see,” / said the frog laconically. “Perfectly content.” Something about his tone—half-burp, / so sure—instantly enraged the Princess, who / then grabbed the frog’s slick carapace and threw it at the wall, which broke the beast into / his handsome, manly origins. “How warped,” / said the plussed Princess. “Now what do I do?”

Yet in one early version of the fairy tale, the princess is somewhat less gracious. Instead of kissing her amphibian, she hurls him against a wall in disgust when he insists on sleeping in her bed. (Happily, the impact with the castle’s stonework has the same transformative effect as the kiss, and the two are instantly smitten.)

Now, thanks to Anna Maria Hong, a fellow at the Radcliffe Institute for Advanced Study, the tale is getting another clever reworking, as part of her new collection of poems. While at Radcliffe, Hong is completing her second volume of sonnets, titled “The Glass Age.”

With the new collection, the writer and editor has been experimenting with breaking the sonnet form, a poem classically defined as consisting of 14 lines that follow an exact arrangement of rhymes.

In her new works, Hong often shuns the sonnet’s formal rhyming schemes, imposing certain structures onto the poem’s frame to “bend it, and torque it, and incinerate it.”

“It’s pushing the limits of how this rigorous shape can still be recognized as a sonnet or not,” said Hong during a talk at the Radcliffe Gymnasium on April 27.

One such structure is the hourglass. Hong said she is intrigued by its physical substance, the glass being both “solid and liquid,” “fragile and durable,” and by its temporal meaning. The poet described the two balls of glass as gyres representing moving spirals of time, a nod to William Butler Yeats, who thought history moved in such a twisting fashion and “was actually moving away from a point of relative stasis and peace toward a point of nightmare.”

Like Yeats, Hong, who has a master’s of fine arts in creative writing from the Michener Center for Writers at the University of Texas and a bachelor’s degree in philosophy from Yale University, has been working with “the sense of time” and “harnessing that sense of impending doom” in her new sonnets.

Hong, whose earlier collection is titled “The Red Box,” also groups her work into categories. Her “Age” series, in which her poems fall under rubrics like “The Copper Age” and “The Iron Age,” aims not to capture the history of an era, but “to evoke a feeling or a tenor or a sense of the time, spring-boarding from the material itself.”

Her “I” series pushes “the boundaries of the ways that we conceive of the self.” Her “Box” series explores the notion of containment, while her “Old Stories” series recasts venerable fairy tales with what she called less predictable, less sexist endings.

Twentieth century Irish poets like Yeats and Seamus Heaney, whom she called “incredibly adept at working in form,” sparked her sonnet interest. Later she drew inspiration from John Keats, Percy Bysshe Shelly, William Shakespeare, feminist poets, and those of the Harlem Renaissance and the New York School.

Hong’s Radcliffe contemporaries have also influenced her work. A paper titled “Weaponizing the Pentagon’s Cyborg Insects” by fellow Nick Turse, a lecture on Aretha Franklin’s “Sonic Black Feminism” by fellow Daphne A. Brooks, and a series of sculptures by fellow Taylor Davis have all helped to inform her sonnets.

“This has been by far the most productive time in my writing life,” said Hong, who quickly surpassed her original goal of writing 40 sonnets during her academic year. Since the fall she has completed 85 works. “There is something about the magic of Radcliffe, the luxury of this time. And the incredible intellectual and creative stimulation has been really, really, really productive,” she said. “I have often felt like the luckiest person on the planet.”

Hong forgoes the computer age for a yellow legal notepad, composing her poems on paper and getting down a full first draft in one sitting. She then types them out on an old typewriter, reworking and revising them as she goes. She likes the tactile feel of the keys under her fingers and enjoys how the method slows the process, forcing her to “think of the poem as a whole each time.”

Asked how sound factors into her work, Hong said it almost always “take the lead.” While working through a poem, she often will leave the wrong word with the right sound in a certain line until she can find another word with the same sound to fill its place.

For the most part, Hong shuns other forms of poetry. She hates the villanelle, and she “can barely tolerate” the sestina. But the sonnet is different. “Its constraints and its rigor,” she said, “and its kind of speeding toward finality, I think, are what appeal to me.”