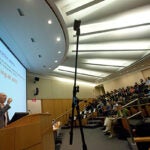 A thorny path to reform

Two years into his presidency, voters are still asking, “Who is Barack Obama? What does he really believe?”

James Kloppenberg, the Charles Warren Professor of American History, set out to answer those questions in his new book “Reading Obama: Dreams, Hope, and the American Political Tradition.” Yet even his careful analysis of Obama’s pre-White House books, speeches, and other writings leaves room for speculation, as evidenced by the give-and-take over the impact of Obama’s presidency during a “20 Questions” panel talk on March 10, sponsored by the Mahindra Humanities Center at Harvard.

The five panelists, moderated by Homi Bhabha, the Mahindra Humanities Center director, batted around concepts of political pragmatism and reasonable debate, and discussed the re-immergence of a bona fide intellectual as the nation’s leader after the “God and guts” direction of the Bush administration, as Bhabha put it.

In his interviews with people who knew Obama in all stages of life, Kloppenberg said, he “was astonished to find the portraits that I was given by people … meshed almost perfectly with each other.

“Either this was the most vast conspiracy in American history, or there actually was a Barack Obama who was presenting himself in these different frameworks the same way: as someone who was intellectually inquisitive, extremely sharp analytically, and genuinely interested in and committed to the process of intellectual debate — what theorists call deliberative democracy.”

Panelists pressed Kloppenberg on whether Obama’s strengths as a thoughtful political analyst serve him well now that he is faced with hard realities of governing with an unyielding opposition.

Peniel Joseph, professor of history at Tufts University, spoke of Obama’s nuanced understanding of political pragmatism in a time of deep electoral divides, wondering, “Does that make him suitable to be president in these specific times?”

“The problem is with our times, not his ideas,” Kloppenberg responded. “I think he has a commitment to — as he puts it — ‘lowering the temperature,’ moving away from the exaggerated and unworkable extremes that dominate public debate.”

But, asked Bruce Schulman, the William E. Huntington Professor of History at Boston University, “does the model of deliberative democracy … presuppose a level of equality among participants that underrates vast dissymmetries of power that exist?”

Indeed, Kloppenberg said, Obama did use as a model the constitutional debates by the all-white, all-male founding fathers. But Obama also noted that the founders were “blind to the whip and the chain.” There is reason to think Obama will address inequity of power in a second term, Kloppenberg said.

Michael Frazer, assistant professor of government and of social studies at Harvard, said that the true test of any political theory is whether it works in practice. What’s been so dispiriting to him in the past two years is that evidence indicates “there’s something wrong with a commitment to deliberative democracy,” and that moderate voices are being drowned out by louder, more entertaining voices on the extremes. “Can we simply blame his opponents or the times if his theories don’t work?”

“In what sense do you say they don’t work?” Kloppenberg responded. “Compare the health care bill —”

“But the health care bill was produced by cutting off deliberations,” Frazer said.

“That’s a debatable point,” Kloppenberg said, citing Obama’s sit-down with Republicans on the issue, which “changed the debate.”

But, he added, he’s not defending every step by the president on finding common ground. “Whether you or I are committed to this way of thinking, I think he is committed to it.”

Alexis Gelber, a former editor for Newsweek and current Goldsmith Fellow at the Shorenstein Center on the Press, Politics and Public Policy, asked how Kloppenberg sees Obama in terms of his religious belief or faith. The question in part addressed the fallacy held by a portion of the population that Obama is a Muslim. “Do you still see him as a man of faith?” she asked.

“I do indeed,” Kloppenberg replied. “I think the tradition in which he places himself is in the tradition of Christian skepticism, which has ancient roots.”

Citing the president’s intellectual rigor — and modesty — under pressure, Frazer said, “I used to think that was exactly what we needed in politics. This ability to always see things from the point of view of one’s opponents, to always question one’s preconceptions.”

But, expecting politics to be like a philosophy seminar is “silly,” said Elisa New, professor of English at Harvard. “I realize that now,” Frazer said.

Let’s take into account long-term political strategy, Bhabha suggested, citing the successes of Mahatma Gandhi. The intellectual Gandhi did not win every time, but he won often, even dealing with Muslims, the British, the Hindus, and his own party.

The night Obama was elected, the new president said his work would not be completed in a year or a term, indicating a long-term strategy, Schulman said.