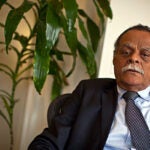 Lessons of the Haiti quake

To understand the importance of integrating a global perspective into Harvard’s courses, just look at the faces of the students in the College’s classrooms.

Harvard students now represent more than 50 countries and a spectrum of cultures, religions, and ethnic backgrounds, said Allan Brandt, dean of the Graduate School of Arts and Sciences, in opening remarks for the School’s second Conversations@FAS, a faculty forum created to explore topics of broad interest related to Harvard’s teaching and research mission.

“How radically different and radically better it is to teach today when our students represent so many countries across the globe,” Brandt said by way of launching the panel discussion on March 25, which explored the topic of “Instilling a Global Perspective.”

Diana Eck, professor of comparative religion and Indian studies and director of Harvard’s Pluralism Project, recounted how when she began her research in the 1980s on Hindu religious traditions, the subject seemed both exotic and remote from Cambridge. Now, many of her students are Indian and/or practicing Hindus, and her challenge is to “engage them in the study of their own culture, many of them for the first time in a disciplined way.”

Harvard students can visit a Hindu temple in Ashland, a Jain temple in Burlington, a Sikh center in Medford, an Islamic center in Wayland, and a dozen Vietnamese and Cambodian temples throughout the area.

“To actually cross the threshold and become a visitor, a stranger really, in someone else’s religion, this is a new experience for many of our students, and I think it’s a very important experience in active learning,” Eck said.

While the panelists agreed on the need for a global perspective, it is less clear how to achieve it. Peter Bol, the Charles H. Carswell Professor of East Asian Languages and Civilizations, recounted a comment made to him by a surprised Chinese parent after listening to one of his lectures: “I didn’t realize it was possible to teach Chinese history in English.” The remark drew a laugh, and Bol said he agrees that learning a language is an essential ingredient in understanding another culture. “It is an essential way to recognize the ‘other’ on their own terms,” he said.

However, he also believes a set of analyses and categories can be used across cultures, adding, “We could argue that [studying] medieval Europe is just as far as doing contemporary China.”

Geography should play a part in any global perspective, said Bol, who is also the director of the China Historical Geographic Information Systems project, a collaboration between Harvard and Fudan University in Shanghai. Oddly, he observed, “At the height of the Iraq war, nearly 80 percent of Americans ages 18 to 24 could not locate Iraq on a map.”

The challenge is how to help faculty and students envision a world in meaningful ways, both as a visualization process and as a way to draw relationships among data, he said.

Caroline Elkins, professor of history and chair of the Committee on African Studies, argued passionately for breaking out of the mold of the Western analytical framework, a stance that posits philosophical and scientific knowledge flowing from the Western Enlightenment downward to the Third Word — what Elkins calls the “global South.”

With new communication technologies, world space is different. The global South, not the West, today may be “ahead of the curve” in areas like sustainability, democratic movements, and capital investment, Elkins said.

Citing the work of Jean and John Comaroff, she argued that citizens of the global South are connecting with each other on key issues “and we [the West] are imposing ourselves into that conversation.”

The panelists acknowledged that challenges to global perspectives are rampant in a time of increased political xenophobia. Witness reaction to the so-called Ground Zero mosque, Eck said. “We have whole groups in the United States dedicated to misunderstanding Islam,” she said. “These are critical issues not just for Muslims but for all of us.”

Yet Harvard is well-positioned and nimble enough to lead the way in instituting global perspectives in education and research, Elkins said. Eck anticipates changes in the classroom formats from reliance on “lectures to one in which there are vivid conversations.” Already, many more Harvard students are spending the summer abroad, giving future leaders personal, practical knowledge outside Cambridge, Bol said.

“From books and travel and learning from people all around the world, we’re able to realize just how narrow our own vision starts out as being,” Brandt said. Today “the opportunities to think globally and think differently … are really quite remarkable.”