The promise of journalism 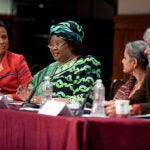 The need for men to back women

As a New York theater critic, Frank Rich earned the title “the Butcher of Broadway.” And as a political columnist, he has left American politicians only slightly less cowed. But when asked to speak on the state of investigative journalism in the Internet age, the feared and respected opinion-maker chose to focus on the positive.

“Some journalistic institutions will suffer, and many already have,” the departing New York Times op-ed columnist said Monday (March 7) at the John F. Kennedy Jr. Forum. “But it’s the history of modern communications that the most apocalyptic predictions of doom — a feature of every period of traumatic technological change — don’t come true.”

Rich was at Harvard to receive the 2011 Goldsmith Career Award for Excellence in Journalism, sponsored by the Joan Shorenstein Center on the Press, Politics and Public Policy. Much like his regular Sunday columns, which search for larger narratives amid the 24-hour political news cycle, his talk provided a big-picture view of American journalism.

Newspapers, the traditional engine for in-depth reporting, are far from solving the financial problems that plague traditional newsgathering in the Internet era, and foreign reporting has especially suffered. “These are business riddles that some very smart people are trying to crack,” he said. But in many ways, he argued, journalism is thriving.

“The Times that is being produced today … is superior to the one my friends and I were devouring” four decades ago, he said.

And the Grey Lady isn’t alone in producing economic, political, and cultural coverage of more depth than the nation has ever seen, he said. Thanks to the universal platform afforded by the Web, he added, the voices in news are “more diverse than we could imagine even a couple of decades ago.”

Newspapers may survive the transition to the digital age as a “smaller but often smarter” medium for news, like radio before it, he said.

Rich’s journalism career began at Harvard, where he served as editorial page editor of The Harvard Crimson before graduating in 1971. While he was inspired by the groundbreaking investigative political reporting of that period, he said, young journalists today “are just as starry-eyed as my cohort was back in my Crimson days.”

A large crowd gathered at the forum to celebrate Rich’s career at the Times, where he started as theater critic in 1980. But the award also marked “the raised curtain of yet another career, another chapter, one that will no doubt be just as tumultuous and exciting and important,” said Shorenstein Center Director Alex Jones.

Rich announced last week that he will leave the Times later this month to write a monthly essay for New York, where he will also serve as editor-at-large of a new politics section and write for the magazine’s website, NYMag.com.

“His departure is akin to Tom Brady leaving the Patriots,” said Jones, Laurence M. Lombard Lecturer in the Press and Public Policy at Harvard Kennedy School.

Indeed, media observers have buzzed about possible reasons for Rich’s exit from the Times, where he is seen as having perhaps the most influential platform that a political columnist could want. But Rich downplayed his role and stressed his desire to switch up his career while he still has time for “another act.”

“I’ve never been interested in this so-called power” columnists have, he said. “It’s not interesting to me as a writer to not like the Bush administration or not like the musicals of Andrew Lloyd Webber … Opinions are cheap.”

“It’s not going to happen overnight, but it’s happening pretty fast,” he said of the shift toward popular acceptance of same-sex marriage.

Rich hedged on a request to predict the Republican nominee for president in the 2012 election. “The Republicans obviously do not have a candidate,” he said, calling establishment frontrunner Mitt Romney too unlikable and current popular frontrunner Mike Huckabee too unappealing to the GOP’s donor base of business conservatives.

Rich was among several winners present at the evening’s awards ceremony. There were six honored finalists for the $25,000 Goldsmith Prize for Investigative Reporting, which ultimately went to Marshall Allen and Alex Richards of the Las Vegas Sun for their series on underreported rates of hospital-contracted illnesses and preventable injuries in the region’s hospitals, “Do No Harm: Hospital Care in Las Vegas.”

Three Goldsmith Book Prizes were awarded to books that examined the role of press and politics in the formation of public policy. Tim Groeling’s “When Politicians Attack: Party Cohesion in the Media” and Patrick J. Sellers’ “Cycles of Spin: Strategic Communication in the U.S. Congress” shared the honor for best academic book, while Jack Fuller’s “What Is Happening to the News: The Information Explosion and the Crisis in Journalism” took home the award for best trade book.