The man from Kyrgyzstan 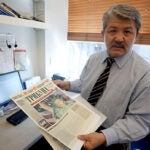 In 1994, Baktybek “Bakyt” Beshimov was the youngest university president in his native Kyrgyzstan when he first visited Harvard. After two awestruck days, Beshimov stood on a bridge over the Charles River and vowed to bring to Osh State University the same academic freedom, opportunity, and ethical scholarship he had witnessed in Cambridge. “I prayed, and I dreamed,” he said.

The dream came true, for a while. During the 1990s, in the first blush of post-Soviet reform, Bashimov made Osh a model of openness, with student exchange programs and an international faculty that by 1996 was 11 percent Western. But the brash young educator was eventually fired and put under house arrest by a national regime skeptical of openness.

Beshimov remained defiant, and that made him wildly popular in Osh, which elected him to parliament. By 2000, the historian was on his way to India for a five-year tour as Kyrgyzstan’s ambassador.

Then came Kyrgyzstan’s “Tulip Revolution” in 2005, which ushered in a government that Beshimov feared would embrace corruption again. He ran for parliament, was elected, and became an increasingly lonely voice for democratic reform. A front-page newspaper article showed him dressed as the Statue of Liberty, being “Uncle Sam’s agent” and a “spy for the West,” he said.

Things got worse. By the summer of 2009, Beshimov had evaded two assassination plots, including what he said was to be a staged car crash on a mountain road.

That August, Beshimov and his wife made separate escapes through neighboring Kazakhstan, and fled to the United States. Last May, following a coup, he was offered his country’s ambassadorship to Washington, D.C., but he turned it down. “I didn’t want to be part of an evil system,” Beshimov said. He regards present-day Kyrgyzstan as a “puppet regime” in the thrall of Russia.

Today, the former diplomat lives in a suburban Boston apartment with his wife, Fatima Mendikulova, an authority on international trade and development who works at the Harvard Kennedy School. Kyrgyzstan has fallen fast, she lamented, to “the bottom of the world.”

Beshimov found refuge last fall in Harvard’s Scholars at Risk program, established nine years ago as part of a network of 194 universities in 23 countries.

Harvard has so far sponsored 22 scholars at risk, including a Shakespeare expert from Iraq, a physician-novelist from Burma, and an engineer from Sri Lanka who builds robots that hunt landmines. Beshimov, who is officially a visiting fellow at Harvard’s Davis Center for Russian and Eurasian Studies and at the Center for International Studies at the Massachusetts Institute of Technology, is one of the few to speak out.

He is bringing his 20 years of experience as a scholar, army officer, diplomat, and politician to bear on a book that will be ready this fall.

Why are Central Asian regimes becoming authoritarian, failing at reform, and so prone to conflict? Despite strong scholarship on those questions, said Beshimov, no one has yet written the comprehensive story.

Kyrgyzstan and other Central Asian republics of the former Soviet Union are fragile, failing, corrupt, and weak, he said. They make up a tinderbox entangling Russia, China, and the United States that “could become a second Middle East.” He said that these Central Asian nations have rejected what democracy can offer: modernization, diversity, human rights, free markets, and limits to corruption. If they fail, added Beshimov, “Islamist forces” will step into the power void.

But his book has a vision too, of how democracy in Central Asia is still possible, he said: “I am still an idealist. I believe in the goodness of people.”

In Kyrgyzstan and other former Soviet republics, said Beshimov, there is an understandable nostalgia for an era when people had jobs and when health care, police, and education systems seemed to work.

At the same time, “I have no regrets” about the demise of the Soviet Union, said Beshimov, whose fraternal grandfather was executed in a 1930s Stalinist purge.

As an undergraduate in the 1970s, Beshimov and his friends read forbidden samizdat literature, listened to rock music, and tuned in to the Voice of America. “Information from the West,” he said, “opened our minds to many things.”

Beshimov was the first Kyrgyzstan politician of his day to harness the power of the Internet for campaigning. From Cambridge, in defiance of geographical distance from his estranged land, he is still using the Web, blogging and writing online articles to bring a message of reform to Central Asia.

“This is underground literature,” said Beshimov of the unfettered Internet, a conduit for electronic samizdat. “It changes people.”