Starting up in hard times 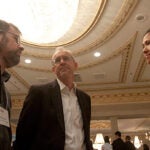 Few American companies bring to mind innovation more quickly than Apple, the inventor and purveyor of iPads, iPhones, and other devices we never knew we needed until, suddenly, we did. But it took a down market to take the company from its humble origins in desktops and laptops to its current heights in making and marketing imaginative products.

When the dot-com bubble burst a decade ago, Apple lost a third of its revenue virtually overnight. Founder Steve Jobs’ recovery plan was highly risky: Rather than sticking to what it did best, the company should venture into new markets.

“Their decision was that they would innovate their way through hard economic times, with the fundamental conviction that there would be a market on the other side of it for the products they would develop,” said Baba Shetty, chief strategy officer and chief media officer at the advertising firm Hill Holliday. The bet paid off: Apple was recently valued at more than $300 billion, outpacing Microsoft for the first time.

Now, as the United States fights its way out of a much broader and deeper recession, Apple’s example should be instructive to both new entrepreneurs and large, established companies alike, Shetty said Thursday (March 24) at Harvard Business School (HBS).

Shetty was joined by a host of other entrepreneurial business leaders and by William A. Sahlman, Dimitri V. D’Arbeloff-M.B.A. Class of 1955 Professor of Business Administration and senior associate dean for external relations at HBS. The session, “Entrepreneurship During an Uncertain Time,” was hosted by HBS and The Economist magazine, and was held for HBS alumni and HBS Executive Education participants. The event explored ways that innovation — and an entrepreneurial mindset — are critical to getting the economy back on track.

“The entrepreneurial process is very important in driving America out of this recession,” said Robin Bew, editorial director and chief economist for The Economist Intelligence Unit and the event’s moderator. The question, Bew said, is whether the current business environment in the United States is doing a good job of fostering a climate where entrepreneurs can take crucial risks and where new businesses can succeed.

The political climate, the panelists agreed, has only made it harder for new businesses to achieve stability. Until Congress is able to settle on a long-term plan for tackling problems like the growing national debt, they said, business leaders will have to navigate a series of short-term, politically motivated legislative efforts that are likely to seesaw dramatically from year to year based on which party is in power.

“We have tremendous uncertainty in the United States about what set of policies are going to be in place,” Sahlman said, because “we’re politically incapable of making hard decisions.”

Not knowing what the tax rates for the next year will be makes it hard for entrepreneurs to plan for the coming year, and such adjustments can make or break young businesses. “We’re stuck in a period where the lack of clarity about direction is going to be problematic,” he added.

Don Young, president and CEO of Aspen Aerogels, lamented the “lack of a predictable regulatory scheme” for businesses like his. Aspen Aerogels, which makes and sells energy-efficient insulation materials for industrial and construction uses, has turned to the federal government for support, applying for a loan guarantee from the U.S. Department of Energy. After spending nearly $1 million on the application process, Young said, “It looks like the program might run out on Sept. 30.”

“That’s a really difficult situation for us,” Young said. “It weakens the foundation of a company like ours.”

Sheila Lirio Marcelo, founder and chief executive officer of Care.com, a fast-growing website that helps to pair families with caregivers, pointed out that immigration laws — another political hot potato — can set young businesses back. Her company has run into trouble trying to get the best Java developers from India to staff her rapidly growing operation in Massachusetts.

“For me to grow, I need the talent for the team to be able to innovate,” she said.

But even in economically and politically uncertain times, large and small companies alike can learn the lessons of smart innovation, the panelists said.

“I think a lot of big companies spend a lot of resources playing defense … where a lot of small companies can play offense,” said Mark Norman, president and chief operating officer of Zipcar, the auto-sharing company that has expanded in the past decade from its Cambridge origins to markets as far away as Vancouver and London.

Large companies are often more interested in protecting their already-successful products than in creating new ones, Norman said. Companies can benefit from “structured experimentation,” or by thinking small even within a big organization.

“Anything new that you roll out, there’s this pressure that it’s got to pan out quickly, and that’s another kind of pressure to kill innovation,” Marcelo said. “But you’ve got to make a bet on these small things, and on trusting your gut, which is part of being an entrepreneur.”

After heated discussion, the evening ended on an optimistic note. Despite how inhospitable today’s economy may look to start-ups, America’s problems are only temporary, Sahlman said.

“The elasticity of innovation and entrepreneurship is the highest in this country of anywhere in the world,” Sahlman said. “All we have to do is figure out a way to unleash it, and we will get progress on all those problems.”