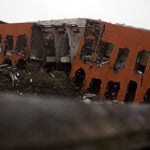 Harvard lends a hand to Chile

Program for imperiled scholars in peril

Baktybek “Bakyt” Beshimov is among the rare Scholars at Risk fellows at Harvard to speak out.

Another was Iranian novelist Shahriar Mondanipour, who was a Scholar at Risk for two years, and is now an associate in Harvard’s Department of English. Last year, praising the program’s organizers, he said, “They make you believe in fairy tales.”

The program must seem like a fairy tale to the scientists, researchers, political figures, and writers who flee persecution in their native lands, who are in danger because of their work, gender, ethnicity, religion, or political opinions.

The Scholars at Risk network is made up of 194 universities in 23 countries, and based at New York University. It was founded in 1999.

Jacqueline Bhabha founded the Harvard chapter, which since 2002 has sponsored 22 fellows. She is the Jeremiah Smith Jr. Lecturer in Law at Harvard Law School, the University adviser on human rights education, and is current chapter co-chair.

But money is tight. The Harvard program recently lost foundation funding. Though still supported by the Office of the Provost, Scholars at Risk can only afford to pay for one scholar a year. In 2011-12, the fellowship will go to a prominent philosopher from Iran.

In 2010-2011, Beshimov was one of two fellows (though the other never managed to get permission to leave his native land). In past years, there have been as many as five scholars in the Harvard program.

Harvard chapter co-chair Stephen Greenblatt, Cogan University Professor of the Humanities, wrote a plea recently for the beleaguered program and its fellows.

“They are courageously trying to hold onto their vocations, their human dignity, and their sense of a possible future,” he wrote. “Clearly, none of the oppression and systematic violence that has led these people to our shores will cease anytime soon.”