Lessons of the Haiti quake 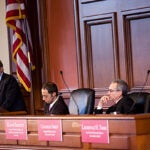 Leaders from government, military, and nongovernmental organizations (NGOs) gathered at Harvard to reflect on the response to last year’s devastating Haiti earthquake and begin the search for ways to improve future disaster response.

A significant part of the discussion Wednesday and Thursday (March 23 and 24) revolved around the lack of coordination in the massive response that saw more than 350 organizations send personnel with a wide mix of skills to the quake area.

The lack of coordination was exacerbated by the fact that the quake struck the island nation’s capital city, Port-au-Prince, and heavily damaged government facilities and equipment, affecting personnel too.

“One of the findings was the need to support the government and government structures very early, provide space for them, generators, vehicles,” said Michael VanRooyen, director of the Harvard Humanitarian Initiative.

Arnold Howitt, co-director of the Program on Crisis Leadership, said participants detailed not just problems, but also things that worked well in the response. The work of the U.S. military, he said, was “exemplary,” and the organization was committed to humanitarian objectives. Some of the larger nongovernmental organizations also were praised. The group felt that the NGOs and the military got to know each other better during the crisis and perhaps dispelled some preconceived notions about each other.

In some ways, the Haiti crisis was unique, VanRooyen said. The island’s needs and proximity to the United States meant there were pre-existing relationships between the two nations in thousands of small ways, through Haitian immigrants to the United States and through schools and church groups that had relationships with Haitian communities and sister churches there. When the quake hit, these relationships resulted in a massive wave that landed groups of people who set up mobile kitchens, supplied water, and even provided small comforts like toys for kids.

“We were already engaged with Haiti. We had a long history of NGO activity, volunteer activity, church activity,” VanRooyen said. “When Pakistan floods, that’s not a place where you’re going to find 20 college or high school kids or kids from a community center who show up in matching T-shirts because they have a relationship.”

VanRooyen said the response of U.S. civil society was a plus, but the veritable flood of organizations and people created chaos in the early days after the quake.

Though 350 NGOs did register with the Haitian government, Howitt said, there were many more operating there that did not register. Participants also voiced concerns that organizations were operating outside their areas of expertise, a potentially dangerous situation if that involves medical procedures. Even after the Haitian government began to get back on its feet, Howitt said, some NGOs continued to go it alone, pursuing their own organizational goals with little concern for the government’s priorities.

While not every disaster will strike at the heart of a nation’s government as the Haiti earthquake did, VanRooyen said many developing nations’ governments are resource-poor and will still need support to cope with a major disaster and coordinate the influx of help. There was some discussion of setting up a fund to help governments cope in such times.

The fund could be used to help construct buildings, meet other needs related to a disaster, and help governments function amid the swarm of helping organizations. There was also discussion of the United Nations’ cluster system, Howitt said, which seeks to coordinate groups around different functional goals, such as health, and which did not uniformly function in Haiti as designed.

One of the participants in the discussions was Haitian Minister of Health Alex Larsen. Responding to questions before the event began, Larsen said that the cholera epidemic that broke out in the weeks after the quake continues and will likely become an endemic disease in Haiti, with periodic outbreaks that must be dealt with by the health care infrastructure. In Port-au-Prince, the general hospital’s reconstruction is moving ahead, with contracts being signed and work to begin in the coming months.

About 800,000 people remain in temporary camps, Larsen said, though some are moving to permanent homes. Those who remain have access to clean water and sanitation, he said.

As to the future, extending primary medical care across the country remains a major governmental priority. As such, the ministry is moving ahead with plans to train more than 5,000 health care workers to function in the community and provide services, particularly to inaccessible rural parts of the country that remain without access to even basic medical care.

Howitt said the roundtable discussions should continue in the future. Organizers plan to write a summary of the sessions for publication on the web and hope to convene leaders in the field to continue to consider the broader issues raised and their general applications to such disasters.