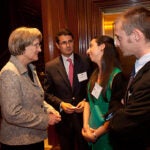 Spotlight on Harvard in Chile

Members of the Harvard community filled the Memorial Church on Monday night (March 21) for a candlelight vigil on behalf of the victims and refugees created by Japan’s devastating earthquake and tsunami.

The vigil was part of Harvard for Japan Week, organized by the similarly named student group Harvard for Japan, the Reischauer Institute of Japanese Studies, the Harvard Japan Society, and the Program on U.S.-Japan Relations. Other events included panel discussions, fundraising efforts, and benefit concerts.

The week wraps up with benefit concerts by the Bach Society Orchestra on Friday (March 25) in Sanders Theatre, featuring renowned violin soloist and Harvard senior Ryu Goto, and a concert by the Harvard-Radcliffe Asian American Association on Saturday (March 26).

Within hours of seeing initial images of destruction in Japan following the March 11 earthquake, the Harvard community began responding. The effort expanded rapidly in the days afterward, as community members worked to raise money and awareness, aid the flow of useful information, and discuss helpful paths forward.

Harvard President Drew Faust expressed concern for those caught in the destruction. “All of us have watched with profound concern and sadness as Japan has confronted the devastating events of recent days,” said Faust. “I know I speak for the whole of the Harvard community in expressing deep sympathy to those who have suffered the loss of family and friends, who have seen their homes destroyed, and who continue to face uncertainty and danger.”

The Harvard Center for Geographic Analysis quickly launched a web portal to assist the flow of vital geographic information for anyone interested, from rescuers on the ground to supporters from afar to those who, over time, seek lessons from the tragedy. The data portal is sponsored by the Reischauer Institute, which reconfigured its own web page to help people find information on the disaster, and also by the Harvard Map Collection, the Fairbank Center for Chinese Studies, and the Institute for Quantitative Social Science. It features live web feeds from Japanese television stations and a link for donating to relief efforts.

Jorge Domínguez, vice provost for international affairs, said the University activated its international emergency response team to account for Harvard-affiliated personnel in Japan, including those at Harvard Business School’s Tokyo office, eventually ascertaining that all affiliates known to be traveling there were safe.

Reischauer Institute Director Andrew Gordon, the Lee and Juliet Folger Fund Professor of History, said it became clear early on that it would be counterproductive for people here to head to Japan to help. So the conversation quickly turned to practical ways to provide assistance.

In the short term, activities such as those led by the Harvard for Japan group will help. The medium term is less clear, Gordon said, because fellowships and summer programs involving travel to Japan may not be practical owing to safety issues or economic turmoil. On the other hand, he said, there may be opportunities for Harvard community members to volunteer with nonprofits to provide aid. That determination, however, will have to wait.

For the long term, the issue becomes scholarship. Given that in the Internet age much of the record of the disaster is only stored electronically, the discussion turned to how material in such a transitory medium should be preserved, perhaps by archiving periodic snapshots of the web pages of representative organizations. Social media should be included, Gordon said, because electronic discussion of such events flourishes on such sites as well as on more traditional web pages.

“There’s so much online discussion happening in these [social sites] for a medium that didn’t exist” a few years ago, Gordon said. “The possibility exists to capture conversations rather than just capturing documents.”

The Harvard School of Public Health (HSPH) convened medical and humanitarian relief experts on March 16 at the Forum at Harvard School of Public Health, a session that was webcast live. The discussion was led by Jennifer Leaning, François Xavier Bagnoud Professor of the Practice of Health and Human Rights and director of the Bagnoud Center for Health and Human Rights, and featured Harvard Humanitarian Initiative Director Michael VanRooyen, an associate professor of medicine and of public health; Gordon Thompson, executive director of the Institute for Resource and Security Studies; Takemi Professor of International Health Policy Michael Reich; and Takashi Nagata, a physician and former HSPH fellow who joined the discussion via web linkup from Tokyo.

Nagata, who had spent days in the disaster zone and was planning to head back to it, said the destruction was so complete and so difficult to bear that he broke down and cried several times. The panelists said the Japanese government needed to do a better job of sharing information so people maintained their trust in the government and continued to heed its directions.

Harvard faculty members have been providing perspective and context, as well, in interpreting the disaster’s ongoing effects, including the shutdown of and radiation release at several damaged nuclear power plants.

Matthew Bunn, associate professor of public policy at the Harvard Kennedy School, has conducted research on nuclear energy and nuclear proliferation risks. Bunn said Monday (March 21) that the ongoing drama at the damaged nuclear reactors seemed to be gradually coming under control. The situation remained serious, and the discovery of radiation in food and water was worrisome, he said, but the chance of a catastrophic explosion was gradually decreasing, barring the unforeseen.

Bunn said the lessons to be learned included having adequate backup battery power for nuclear plants. But a critical lesson involved not safety but security, because the disaster highlighted the danger that can arise from multiple system failures, such as might occur from a terrorist attack.

“There is a safety issue, but I think this is a more compelling security issue,” Bunn said.