For Libya, ‘no compromise’ in sight 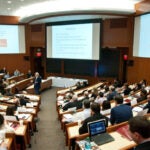 Starting up in hard times

When the popular protests that have swept the Mideast reached Libya in mid-February, Ali Suleiman Aujali knew what he had to do. The longtime Libyan diplomat, who had served as ambassador to the United States for the past two years, abruptly quit and threw his support behind the rebel uprising.

Libyan leader Moammar “Gadhafi made it very easy for me,” Aujali told a packed audience at the John F. Kennedy Jr. Forum on Tuesday (March 29). “He is killing his own people without discrimination and without limit.”

When dealing with an authoritarian ruler such as Gadhafi, Aujali said, he learned that “there is no compromise.”

It was a lesson that Aujali hoped to drive home at Harvard, and one that the United States and its allies must learn now that they have entered the escalating conflict, he said at “Libya After the No-Fly Zone: Political Change or Civil War?” — a discussion hosted by the Harvard Kennedy School’s (HKS) Middle East Initiative and the Belfer Center for Science and International Affairs and moderated by R. Nicholas Burns, Sultan of Oman Professor of the Practice of International Relations at HKS.

Aujali, who is now a part of the unrecognized transitional government of Libya, said Libyans are united in their desire to see Gadhafi go, and urged the United States to provide arms and money to rebels to help speed his exit. “Libyans want some justice, and they want help for their future,” he said. “We want also, of course, to exercise our right as a democratic country.”

But the road to Libyan democracy is paved with unanswered questions: How strong are Gadhafi’s forces on the ground? Just who are the rebel forces the American-backed international coalition is supporting? And now that the United States has intervened in a potentially protracted civil war, how does it formulate an efficient and effective strategy for putting Libya on a path to true reform?

To help answer those questions, Aujali was joined by Dirk Vandewalle, associate professor of government at Dartmouth College and an authority on Libyan politics, and Stephen Walt, Robert and Renée Belfer Professor of International Affairs and faculty chair of HKS’s International Security Program.

American leaders shouldn’t make the mistake of thinking Gadhafi can be negotiated with, Vandewalle argued. Gadhafi, who rules Libya more like a warlord than a modern head of state, is driven by a kind of “tribal ethos” to maintain power at all costs and to quash dissent within his ranks. Furthermore, Vandewalle said, Gadhafi “truly believes … that he represents the true voice of the Arab people.”

“If you live in that kind of self-referential world for so long, where no one ever questions you, you come to believe what you’re saying,” Vandewalle said.

Where Aujali was hopeful for a democratic Libya, Vandewalle was skeptical. Libya has had “no real institutions or state to speak of” since Gadhafi came to power, he said. “How likely is democracy in a country that doesn’t even have the very basic institutions of what democracies need to sustain themselves?”

In the short term, the international coalition that instituted a no-fly zone in Libya on March 18 will have to figure out how to get Gadhafi out — and how it will respond if he doesn’t leave quickly and quietly.

“The best outcome here is a rapid transition of power,” Walt said. “If this [allied intervention] is a success, NATO will get some credit, and the United States will get a lot of the credit … but if this goes south, the U.S. will end up getting a lot of the blame as well.”

The allied air strikes arrived just in time to save the lives of perhaps tens of thousands of Libyans in Benghazi, the panelists agreed. But the danger, Walt said, is that what began as a humanitarian intervention in Libya could ultimately lead to much more bloodshed if Gadhafi isn’t driven from power soon. If he remains steadfastly in power, Walt said, America and its allies “will face a whole series of very awkward choices” on whether to arm or provide funds to the rebel army, and perhaps even whether to send ground troops into the country.

But if the United States and its allies help see Libya through a gradual transition to representative government, Aujali concluded, the United States could finally achieve that most elusive of successes, one that today seems as unlikely as Mideast revolutions did before this year: “more respect and more credibility in the Arab world.”