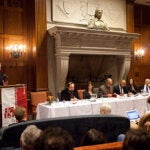 Stuck in an abusive marriage, Joyce Banda, a young mother of three, did something unheard of in her country, Malawi in southeast Africa. She left her husband.

Armed with an education and fierce determination, she started a successful company, founded the National Association of Business Women (which today assists more than 20,000 women), and created the Joyce Banda Foundation (a school for economically disadvantaged children and a nonprofit that promotes health, education, business, and food security).

Banda entered politics in 2004 as a member of Malawi’s parliament. In 2009, she became the nation’s first female vice president. Women’s health, education, economic empowerment, and getting women into leadership roles are the cornerstones of her agenda and what she considers the keys to Malawi’s success.

She visited Harvard last week to participate in a two-day conference on gender in the developing world. The conference was held at the Radcliffe Institute for Advanced Study, where she also delivered the Rama S. Mehta Lecture, discussing the economic empowerment of women. Banda also visited the Harvard School of Public Health (HSPH), where she examined the role of community leadership in improving women’s health.

Banda spoke with the Gazette about her work:

Gazette: What started you on your road to championing women’s rights?

Banda: I think it all started out when I went to live in Kenya, because that is the time they declared the decade for women, 1975. … I didn’t realize at that time that I was locked up in an abusive marriage. As an African woman, I had been brought up to believe that that was normal, that if you are in a marriage there is nothing too much for you to bear, you can tolerate anything, you can live with anything, until I went to Kenya. My husband then was in diplomatic service in Kenya. So I went there as a wife, and I was 26. … There were so many activities that were not happening in Malawi, and I just thank God because I was at the right place at the right time … for the first time in my life I began to hear words like violence against women, abuse, women in development, gender-based violence, gender equality. I didn’t even know as an African woman you could begin to think about being equal to anybody.

Gazette: Once you returned to Malawi, you left your marriage and were able to start a successful business manufacturing industrial garments. How did you make the transition from business to the world of organizing and to creating Malawi’s National Association of Business Women?

Banda: I began then to look around and say, “Here I am,” but if I hadn’t made that one move, I wouldn’t be here. How many of my friends are still locked up in abusive marriages just because they are not brave enough to do something about their situation, to walk out? … While asking myself these questions, I was fortunate to be sponsored by the U.S. government to come to the U.S. on a study tour … [I] interacted with the National Association of Women Business Owners and saw the strength in unity, and saw the strength in women mobilizing for women. By the time I went back home, I had made up my mind that the way I was going to reach out was to get maybe 100 women together, form a network, act as a pressure group to push the government for equal opportunity in business. I didn’t have the slightest idea that what I was starting was going to be a revolution. … That is how the organization started. I went district by district, countrywide, telling everybody our time had come.

Gazette: You often speak of a friend from Malawi who was a bright student but who couldn’t afford to continue with her studies. How has that experience guided your fight to educate women in your country?

Banda: What has made me very angry throughout my adult life is to see [her] still locked up in poverty in the village, married at 16 with a child. And two weeks ago, I got a phone call from her. She was in hospital. That child is dying of AIDS. So [she] has lost out, through and through. And the question I have asked myself is “Why, why, why am I here as vice president and [she] is not?” … I decided that I was going to spend my adult life sending as many girls as possible to school.

Gazette: Why did you decide to go into politics?

Banda: It was when we were heading toward the elections of 2004, women began to say, “Why don’t you go and sit where the laws are made, because we know that your voice can be heard, and you can begin to impact on those laws, change those laws that negatively impact on us.” And I told my husband, “I think I need to go to parliament.”

Gazette: How do you think African nations can best benefit from foreign aid?

Banda: [Other] Joyce Bandas are out there in Africa. They are just waiting for partners. They can do it, but they just need support. So, for many years, I have been saying this. It just breaks my heart, international NGOs come; they think they can do it all. They do it wrong because they don’t know what to do. And indigenous NGOs are there, struggling [with] what to do, what should be done, because they don’t have resources. Instead of there being a partnership in order to achieve more, they work in different ways.

Gazette: In addition to speaking at Radcliffe during your trip, you also visited Harvard’s School of Public Health. What topics did you address at HSPH?

Banda: They wanted me to share my views about the delivery of services to mothers to avoid maternal death. The approach that I took in Malawi was to recognize the important role that community leadership can play in maternal health, in avoiding maternal mortality. … The [village] chiefs being the custodians of culture and tradition, whatever a chief says in the village is what everybody will do. And if you can only hook them in and get them to understand that the women are dying in their villages, and they can stop it [by sending them to health clinics], then you have won half the battle.

Gazette: What is the message you would like to leave with people here?

Banda: Africa must encourage as many women as possible to get into leadership positions. Because what we have found is when a woman gets into a leadership position, the first thing that she does is to look at issues of women and children. And with most of [these women], you find the self is the last thing that she thinks about. She comes in to serve. I have noticed this across Africa. …  Also, the time has come when the U.S. and the whole world must take African leadership, grassroots leadership, activists, seriously, and realize that we are not just sitting back and waiting for handouts. We are doing something about our situation, and therefore what we are looking for are partners to come and work with us. … We want the World Bank to come and help us implement our program, rather than us implementing their program.

Gazette: You have worked with Joia Mukherjee, associate professor in medicine at Harvard Medical School and medical director of Partners In Health, which has a clinic in Malawi. What have you gained from your experience with Harvard?

Banda: What I find most encouraging and inspiring about Harvard is that willingness on the part of Harvard to listen to us and to be interested in working with us. … They look for us, and they seek us, and we sit together, and we look at the problems of Malawian women and children together.