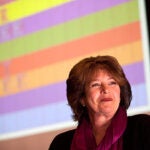 Study suggests our assumptions about talent can influence our judgments

How do you get to Carnegie Hall? Apparently it takes more than practice.

In 1989, violinist Sarah Chang made her solo debut with the New York Philharmonic. That performance was followed by the release of her first album a year later. Her playing was praised as “miraculous.” The BBC said she played with “verve and intelligence.”

Chang was 10, a true child prodigy.

Child prodigies are a not-infrequent phenomenon in the music business, and have been known to arrive on the public stage with quite a bit of fanfare. Many famous musicians across the centuries have been child prodigies. Mozart and Beethoven, to name two of the most famous, began composing at ages 5 and 14, respectively.

As a musician herself, Chia-Jung Tsay witnessed this trumpeting of child musicians for nearly two decades. “I remember one competition where there was a girl who was 7 or 8, who was physically carried up to the stage by her mother, suggesting this infantile prodigy,” she remembered. “And there are all these programs that called specifically for people under 15 or under 18. There was such a narrow range wherein people were willing to invest in talent.”

Fields such as music, math, and chess have had a predilection for a long time to seek out the youngest and most accomplished among them. According to Tsay, this is because “we want to seek something that’s inherent to us. We associate accomplishment at a young age with something that comes effortlessly.” But does this desire to seek out “natural” talent eventually skew our view of what talent is?

A few years back, a speech by Malcolm Gladwell caught Tsay’s eye. In it, Gladwell spoke about how the National Football League seems to recruit quarterbacks with a natural, stereotypical “quarterback physique,” even if they are not the most qualified for the position. “I got this sense that people are so captivated by the concept of natural talent,” said Tsay, “that it might influence our judgments of the natural performance.”

Tsay and her adviser, Mahzarin Banaji, the Richard Clarke Cabot Professor of Social Ethics, began looking at different domains, considering which fields more strongly emphasize natural talent over hard work and experience. They found that music was the most often cited for natural talent, and business was most cited for hard work.

“Venture capitalists recognize that hard work and background knowledge in the field matter a lot,” said Tsay. “It’s the same for a doctor or a lawyer, where hard work and years of experience are what make us successful. But I think there’s a little more subjectivity in evaluation in artistic fields.”

To test this, Tsay and Banaji brought in more than 100 professionally trained musicians. Each participant was presented with two profiles of two professional musicians, and a sample musical clip to listen to from each musician. The participants were then asked questions about how talented and successful they perceived the performer to be, and how willing they might be to hire this person.

In fact, both clips were the same musical excerpt, and the profiles differed only in their mention of whether the musician had natural or learned talent. The results ultimately showed two effects: “We found even in experts and ostensibly professionally trained musicians, most of them could not tell that the recordings were the same. And on average, people seemed to prefer the ‘naturally’ talented individual, even when they said they believed hard work was more important than natural talent.”

The dramatic results suggest, according to Banaji, “a crucial disparity between what experts espouse, and perhaps even consciously believe, is the best indicator of talent, and how they actually behave.”

This experiment is, of course, only the first in the process. The next step is postulating why this is the case. Tsay intends to study not only different industries and professional fields, but cultures. “How generalizable are these findings? What about in a profession that calls for a consistent, ‘average’ performance? In Eastern cultures, is it all about hard work? Is there such a dissociation?”

Banaji wrote in an email, “Going forward, we need to find ways to get experts to confront their fascination with naturalness, which has many virtues, but surely not enough to set aside solid, objective indicators of talent. Are we able to correct for this bias?”

This leaves the question in the balance: Would people like Sarah Chang, who is a talented musician by any measure, have been anywhere near as financially successful as they are today had they not begun performing as children? It remains to be seen, but it is perhaps fortunate that Chang’s music can still be appreciated by all ages.