A thorny path to reform 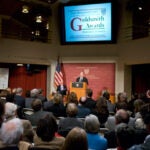 The promise of journalism

“What kind of immigration reform do we need?” asked Edward Schumacher-Matos of Harvard Kennedy School (HKS) during his introduction to the “Inequality and Social Policy” panel on March 3 in Tsai Auditorium.

Borjas launched the discussion by summing up two crucial questions of immigration reform: How many people do we want and how are we going to choose? “Because many, many more people want to come to the U.S. than we are willing to accept,” he said, “and therefore there will have to be discrimination” in the sense that policy must specify rules.

Waters took a long view of immigration, focusing on multigenerational effects such as assimilation.

“Assimilation not only has worked in the past,” she said, “but is working now.” She pointed to research on the success of second-generation Americans in learning English, in assimilating and contributing to American culture, and in achieving socioeconomic mobility.

Waters also argued that higher immigration rates would help to compensate for the loss of Baby Boomers who are retiring at increasing rates.  This wave of retirements, she stated, “sets up a need for replacement workers.”

Massey said that if he were the “immigration czar,” he would grant unconditional amnesty to children of immigrants, provided the children had no criminal record.

Waters concurred, highlighting the ways the undocumented status of parents leads to inequality of opportunity for their children, even those born in the United States.

She also said that having 11 million residents with limited rights “is corrosive for a democracy.” She urged audience members to consider what it means to live in the United States without the protection of labor laws or law enforcement in cases of domestic abuse and other crimes—or health care access, before medical problems escalate to emergency room issues.

Massey traced the current climate — which he believes has produced the most severe wave of xenophobia since the 1920s — to the 1965 amendments to U.S. immigration policy. Those amendments, Massey said, led to the “first-ever numerical limits on migration from the Western hemisphere,” resulting in an increase in the number of undocumented immigrants as legal avenues were reduced or eliminated.  Illegal immigration, he said, opens a “huge political door” for anti-immigrant reaction.

Earlier in the discussion, Schumacher-Matos said, “President Obama has not gone to the mat to push [immigration reform] through.”

“Immigration reform is not dead,” Schumacher-Matos said, “but it is almost there.”

The discussion was sponsored by the Wiener Center for Social Policy’s Multidisciplinary Program in Inequality and Social Policy.