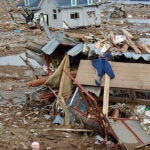 At ground zero in coastal Japan

The landmark health care bill was passed by Congress and signed into law by President Obama just over a year ago, but today it appears the highest court in the land will determine its ultimate fate.

Experts agree that a number of federal court challenges questioning its legality mean the Patient Protection and Affordable Care Act is almost certainly destined for the Supreme Court.

Thus far five federal court judges have ruled on the law, which guarantees access to health care to millions of Americans through an individual mandate requiring people to purchase insurance or pay a tax. Three courts have supported it, while two have challenged its constitutionality, including one in Florida that recently declared the entire statute invalid.

But before heading to Washington, the debate took a Harvard detour.

On Thursday (March 24), a year and a day after President Obama made the law official, three legal scholars took up the question of whether or not the act violates the Constitution.

There is no legal precedent for Congress requiring every person to enter into a contractual relationship with a private company, argued Professor Randy Barnett of Georgetown Law, who complained that the law oversteps the Commerce Clause, an enumerated power in the Constitution that gives Congress the power to regulate interstate commerce.

“This has never happened before.”

While the government can require things like the military draft, taxes, and jury duty, “each of these duties is necessary for the operation of government itself, and each has traditionally been widely recognized as inherent in being a citizen of the United States,” said Barnett.

An alumnus of HLS whose work has been used by the courts finding the reform unconstitutional, Barnett also complained that there are no limits placed on this “new claim of federal power.”

“Once the power to conscript Americans to enter into contractual relations with private companies is accepted here,” he said, “it will be accepted any time Congress needs economic mandates to be convenient to the regulation of the national economy.”

Charles Fried, former solicitor general of the United States and associate justice of the Supreme Judicial Court of Massachusetts, countered that the Supreme Court has ruled that insurance is indeed commerce, and that “health insurance as a species of insurance is surely commerce.”

Citing former Supreme Court Chief Justice John Marshall, Fried added that Congress has the “power to make the rule which regulates the subject of commerce.”

Fried, the HLS Beneficial Professor of Law, also noted that the current health care mandate exists because Congress was “skittish” about adopting socialized medicine in the form of a single payer system or the government option.

“It is ironic,” he said, “that a device used to keep health care within the private sector, is somehow viewed as an enormous assault on our liberties.”

Panelist and Carl M. Loeb University Professor Laurence Tribe examined whether a mandate to purchase health insurance or pay a penalty tax can be considered an invasion of one’s liberty.

“There may be a right in the enumerated penumbras of the Bill of Rights or the Liberty Clause, a right not to be forced to accept medical care you do not want, but there’s no right to force the society to pay for your medical care by taking a free ride on the system.”

I. Glenn Cohen, an assistant professor at Harvard Law School and co-director of the Petrie-Flom Center, moderated the event.