What it takes to lead 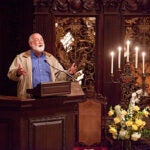 ‘That was his dream’

A trip to any bookstore reveals that treatises on leadership are a dime a dozen. And at America’s graduate schools, courses on the subject — in every field from business to public administration to education — are almost as prevalent.

But for all the evidence that people want to become leaders, not many experts are willing to say just what that means.

“People write about leadership without ever getting around to defining it,” said Nan Keohane, a member of the Harvard Corporation, the University’s governing body, since 2005.

As Harvard and other universities mull the best ways to prepare future leaders in every sector, few people are better suited to tackle the topic than Keohane, author of the recently published book “Thinking About Leadership.” A political theorist turned president of Wellesley College and later of Duke University, she went from studying famous tracts on leadership by Machiavelli and Plato to occupying a lofty position from which to write one herself.

Keohane gave her own definition of leadership Monday night (Feb. 7) at a forum sponsored by the Harvard Kennedy School (HKS). “Leaders define or clarify goals for a group, which can be as small as a seminar or as large as a nation-state,” she said, “and mobilize the energies of members of the group to pursue those goals.”

But her summary hardly settled the matter of just what makes a leader and, perhaps more importantly, how and whether those traits can be taught.

Those questions made for a lively debate at the John F. Kennedy Jr. Forum, where Keohane took the stage with three Harvard authorities on leadership: Nitin Nohria, dean of Harvard Business School (HBS); Monica Higgins, a professor at the Harvard Graduate School of Education (HGSE) and a former HBS professor; and moderator David Gergen, the Public Service Professor of Public Leadership at HKS and director of the Center for Public Leadership.

Gergen sparked the conversation by addressing the relative weight of two important characteristics generally assigned to leaders: competence and character. There’s a common perception at top universities, he said, that “we ought to prepare people to be leaders of character — that if one can get that right, a lot of other things flow from it.”

The best way to build character in young leaders, Keohane said, is to expose them to good role models.

“There has to be a mood in the community that character, in the sense of integrity or a sense of personal responsibility for your life and your activities, is an important part of what makes you a leader,” she said.

HBS, arguably the best program in the nation for teaching “competence” to young business leaders, has wrestled with how to emphasize character in its curriculum, Nohria said. “Cultivating character is an important goal,” he said, but “I’m not sure that our 90-person case method in our classrooms is necessarily the best way to do it.”

In his course on leadership and accountability, Nohria teaches students about the famous Milgram experiment, where roughly two-thirds of participants agreed to administer what they believed were dangerous electric shocks to other test subjects if told to do so by authority figures. Even after learning the results of that study, Nohria said, “Less than 30 percent of students admit that they would be capable of engaging in the same acts.”

“It’s a hard thing for people to confront the fallibility of their character,” he said.

But not everyone agreed that building character trumps all.

“I’m nervous about this notion that character in an admirable sense is a building block of leadership,” Keohane said. “There are leaders who are quite effective who pursue horrific goals,” including Adolf Hitler, she added, who was especially competent at mobilizing Germany in his early years as Führer.

Indeed, Higgins said, there is no one-size-fits-all method to creating leaders that will work for all sectors. HGSE’s new Doctor of Education Leadership program, which accepted its first class of 25 students in the fall, teaches a very different approach to leadership from the Kennedy School or the Business School, she said.

In K-12 education, Higgins said, leaders spend as much time building legitimacy as they do wielding actual power. Superintendents and principals must lead by “inverting the pyramid” and inspiring teachers and parents at the bottom.

“I’m thinking about leadership as … creating the conditions in organizational systems so that people can do their best work,” she said. She recommended a model for training leaders in education based on medical education and residency programs that put students “out in the midst” of their field.

Ultimately, universities are required to do more than just teach leadership to students, Keohane said. They also have a debt to scholarship. And despite those fully stocked shelves in bookstore business sections, she maintained that there is still a deficit of real literature on leading.

“It’s easier in some ways to teach people to lead than to make sure we understand what leadership is,” she said.