Turning on the lights 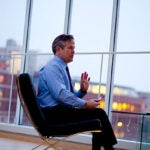 Despite the economic strides that many of its nations have made in recent years, Africa is still, in a literal sense, a dark continent. No country there represents this more clearly than Liberia, where only 2,000 homes in the nation of 4 million are hooked up to the electrical grid.

But where others see a problem too big to solve, Richard Fahey sees a hopeful future, and a burgeoning commercial market for solar energy.

“Liberia certainly is dark in terms of light, but not in human capital,” said Fahey, a 2010 fellow of Harvard’s Advanced Leadership Initiative.

This spring, Fahey will launch the Liberia Energy Network, a large-scale solar power project. If he reaches his goal of putting sun-powered lanterns in the hands of a million Liberians by next year, he will have proven, he said, that socially conscious industry can thrive in the impoverished nation.

Fahey, a retired environmental lawyer from Ohio and a Peace Corps volunteer in Liberia in the 1960s, had a chance to return to the fragile country in 2009. It was the first time he had visited since a 14-year civil war broke out in 1989.

“One of the things that struck me was how shattered the social and cultural institutions are,” Fahey said. “The war did serious damage to the social order.”

He did notice, however, that a surprising number of Liberians had cell phones. Estimates of the average Liberian’s annual income hover around $220, but there was clearly a thriving market for first-world technology.

After the war, Fahey said, “so many people had to leave their traditional homelands and move to the cities. You have extended families now that are very distant from one another.” Cell phones became a way to stay connected to the village community.

The cell phone is so valuable, in fact, that the average Liberian spends 25 percent of his or her income (roughly $48 a year) to charge it, according to Fahey’s research. Because the vast majority of the country’s homes lack electricity, Liberians travel to “electricity centers” that exact a high price in exchange for charging a phone.

It’s what Fahey calls “just-good-enough technology,” a way to circumvent the expensive and unrealistic process of building a traditional energy grid. “That kind of investment is a very long way away,” Fahey said. “Plus it’s very old technology.” With solar power, he reasoned, “the people could build their own grid.”

Currently, the country’s poor inhabitants use inefficient and environmentally unfriendly kerosene lamps to light their homes.

“Their lives effectively end at sundown,” Fahey said. “And that has impacts for everyone.” It’s not uncommon, he said, to see children on sidewalks congregated around streetlights in the evening, trying to finish their homework by lamplight. Women and girls in particular are at a disadvantage, because they are often required to gather firewood or other fuel during the day and have no way to study at night, Fahey said.

In addition, dirty energy takes a toll on health. The World Health Organization estimates that 2 million people — 85 percent of them women and children — die annually from the air pollution caused by kerosene lamps and indoor cooking fires.

“Electricity is such a fundamental need that so many other things are built on top of,” Fahey said.

While Liberia, in Fahey’s words, “practically exists off foreign aid,” the microfinance industry has just begun to penetrate the country. Fahey is working with an anthropologist in Liberia to research traditional savings groups, which many Liberians use to finance cell phone purchases, as a way to help consumers purchase solar lanterns. He has also hired Liberians to lead focus groups that are testing different styles of solar generators.

“We’ve been trying to tell others what we think the Liberians need rather than asking what they need,” Fahey said. “This is giving them choices and thinking of them as consumers.”

That attitude is crucial to any business’s success, according to Michael Chu, a senior lecturer at Harvard Business School (HBS) who specializes in social enterprise and emerging markets, known in the B-school lexicon as “business at the base of the pyramid.”

Chu emphasized the role a successful, self-sustaining business can play in an untested market like Liberia. Good businesses attract competitors, which can in turn bring long-term economic growth to a region.

“The big impact of applying commercial solutions [to poverty] is not that one successful firm that comes out of it,” Chu said. “The big social payoff is that one great, successful business will create an industry.”

Chu’s ideas were among those Fahey absorbed at Harvard. The Advanced Leadership Initiative, now in its third year, offers late-career professionals the chance to audit courses across the University and prepare for new roles as leaders in the public sector, tackling social problems.

Harvard was “a good place to come retool and recalibrate,” Fahey said. “I came here with a vague idea that would have looked a lot more like a traditional aid or development model. My thoughts have moved probably 180 degrees from that.”

Like many of the initiative’s fellows, Fahey is showing that “public good can also be carried out by for-profit companies,” said Rosabeth Moss Kanter, HBS’s Ernest L. Arbuckle Professor of Business Administration and the chair and director of the initiative.

“It’s not a question of nonprofit or for-profit, private sector or public sector,” she added. “We need more and better leaders in every sector, because the challenges and problems seem to be getting bigger and harder to solve.”

Fahey will return to Liberia later this month to continue raising capital for the project. After a long career in law, he’s energized by the thought of returning to the country he first tried to help as a newly minted college graduate.

“There are a lot of us who still have some tread left on the tires and really want to do something,” he said of his generation. “You just can’t play enough golf.”