To catch a killer 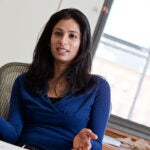 Last summer, the Los Angeles Police Department (LAPD) brought in a young African-American man on a felony weapons charge. After obtaining a DNA sample, the police found a close match in their database: previous samples taken from crime scenes thought to involve the “Grim Sleeper,” a serial killer linked to about 30 attacks and deaths in the Los Angeles area since 1985.

The DNA from the young man wasn’t enough of a match to make him the Grim Sleeper. But the strains were so similar that investigators suspected the murderer to be someone related to him.

In fact, the young man turned out to be the killer’s son. After a careful sting operation, 25 years after his first murder, the LAPD caught the Grim Sleeper.

This triumph of modern forensic science is an offshoot of the rising field of genomics, the policy implications of which are of growing interest to Jennifer Hochschild, the Henry LaBarre Jayne Professor of Government and professor of African and African American studies.

As a political scientist, Hochschild is less interested in the exact science of genomics than in its potential political and social implications. She views genomics as likely the next hot scientific topic to burst into the policy arena.

“Look at stem cell research,” Hochschild said. “At some point, nobody outside the scientific community had ever heard of stem cells. Suddenly they were politicized within about 30 seconds of being mentioned in public discourse. Genomics doesn’t have that partisan valence — yet. We are convinced it’s going to.”

On sabbatical this semester in Washington, D.C., Hochschild and graduate student Maya Sen are conducting interviews with political figures, lawyers, scientists, and academics to find out what they think of genomics, and to try to predict how the politics will develop.

“What are the analogies they use?” Hochschild asked. “Is it like stem cell research? Is it like Nazi-level experimentation or 1920s-style eugenics?  Or is it like Sputnik, a new frontier of discovery?  Are the politics going to revolve around scientific cues that people absorb from experts, or will there be a few really dramatic cases that help shape, and possibly even distort, its reputation?”

A likely flashpoint, predicts Hochschild, lies in precisely the sorts of criminal justice techniques that helped to apprehend the Grim Sleeper. Currently, most states require every convicted felon to provide DNA samples. The database used by police departments all over the country contains about 8 million samples.

Despite the good this information can do, there are legal and ethical questions written all over it.

“Who owns a piece of evidence with someone’s DNA on it? At the moment it’s legal to collect these things, and perhaps to store the DNA for a long time, even after the person is released from prison or jail,” said Hochschild. “The people in these databases are disproportionately Latino and black. If those are the people who are most likely to actually have been at the crime scene, that’s OK. But what if they’re not?”

The racial slant of the criminal justice system is not the only thing under Hochschild’s microscope. Genomics can have vast implications for medicine and medical treatments based on race.

In 2005, said Hochschild, the Food and Drug Administration approved a drug for congestive heart failure in self-identified African-Americans. It was the first time a race-specific medication was ever put on the market, and, according to Hochschild, “all hell broke loose.”

“Social scientists freaked out, fearing that this was a throwback to the days when race was thought to be biologically determined,” Hochschild said. “But the Congressional Black Caucus and people at Howard Medical School supported it, at least cautiously. Their view was that it’s a big step forward in that people are finally paying attention to the fact that black people can get sick differently from white people. And after all, their constituents and patients are dying of heart failure. If the medicine works, why not use it?”

These questions get especially complicated, she added, when it comes to issues like genetic testing for diseases and visitation rights.

“Should we allow for genetic testing at the desire of the patient rather than the medical professional?” she asked. “Should it be regulated? Do a patient’s kids or spouse have a right to the information? What happens when you start talking about blended families? This is all information that will profoundly affect them. Who has the right to know?”

The potential controversies around genomics are endless, Hochschild said.  And, she added, “All this stuff is going to become political.”

Looking to the future, Hochschild sees signs of a ticking clock.

“Most practicing politicians, including [President] Obama, want more and better DNA databases, and more and better funding for use of forensic science in criminal justice. Police departments are more wary. Are they really prepared to use this technology? Of course, civil libertarians are nervous.”

It’s only the beginning. According to Hochschild, genomics is going to take society to places that it can’t even imagine yet.

“They couldn’t have predicted in 1910 that the atomic bomb was going to happen, even though they knew physics was going to be a big deal,” she said. “The current generation of college students is going to be dealing with the implications of the new biological sciences for the rest of their lives.”