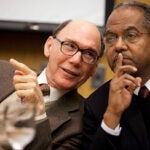 Visiting artist gets help from students on ‘Corbusier Furniture Project’

Since graduating from Harvard in 2003, installation artist Liz Glynn has earned an M.F.A. (California Institute of the Arts) and has had exhibits in New York, Austin, San Francisco, and Los Angeles (now her hometown). She has had art residencies at O’Artoteca in Milan and the Atlantic Center for the Arts in Florida. Glynn has also picked up representation at galleries on the East and West coasts. Her work is featured in “Sculpture,” an exhibition through March 5 at the Paula Cooper Gallery in Manhattan.

But Glynn has taken time off to work again in the Carpenter Center, the iconic modernist Le Corbusier building on Quincy Street where she spent four years doing studio work as a student in Visual and Environmental Studies (VES). Through Saturday (Feb. 5), Glynn is this year’s Josep Lluis Sert Practitioner in the Arts, a visiting artist position in place at VES since 1986. The idea: welcome a working artist for a week of intense interchange with students.

For such a busy person, Glynn chose to do something that is at least suggestive of rest. Her “Corbusier Furniture Project” involves building two replica tubular steel chairs modeled after the great Swiss designer’s leather-covered LC-2 fauteuil grand confort, petit modèle — or, “great comfort sofa, small model.” One is in place already, in the Carpenter Center’s main gallery, where Glynn’s work joins that of two other VES graduates in a show called “Object Lessons” (through Feb. 20). The other, with the help of her students, will be ready Thursday (Feb. 3).

But don’t expect comfort from what Glynn calls “On the Museum’s Ruin (Morris Hunt – Corbusier – Piano),” 2011. This LC-2 is made of a replica frame and five cast blocks of rubble from the Fogg Museum renovation going on next door on Quincy Street. It’s spiky and lumpy. And don’t sit down on it anyway. Despite tipping the scales at 400 pounds, the chair is not designed to bear weight.

But the chair is designed to remind Harvard that its traditional architecture met the “aggression of modernism” not long ago, said Glynn. And the Carpenter Center is the highest expression of that modernism on campus, she added — a welcoming, affecting space despite its stark layout and concrete structure. “I fell in love with it.”

But a cast chair is never just a cast chair. It’s a learning opportunity. To make the first chair, Glynn experimented with 16 different formulas to cast the blocks of rubble into usable blocks. She’ll pass on what she learned to her 15 students, and add in lessons on the history of the casting and concrete from ancient to modern times.