‘That was his dream’ 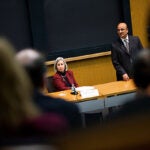 Spotlight on the international

According to S. Allen Counter, it was a scene that would have made civil rights leader Martin Luther King Jr. proud.

“You represent the living form of his dream,” said Counter, director of the Harvard Foundation, member of the Faculty of Arts and Sciences, and clinical professor of neurology. “Here we sit tonight as members of the Harvard family, and you are of all backgrounds. You are black, white, Hispanic, Asian; you are Christian, you are Jewish, you are Muslim, you are Buddhist.

“And that was his dream.”

“It offers us the opportunity to come together in the midst of Black History Month, to reflect on the life and legacy of Dr. King, and to be reminded of the fact that his mission is not yet complete,” Katz said. “We are here to be reminded that it is up to us to carry his mission forward.”

The Kuumba Singers opened and concluded the event with their uplifting a cappella gospel, and Harvard College students read selections from King’s famous speeches, which called for nonviolence, inclusion, and compassion.

The keynote address was given by the Rev. Gregory Boyle, executive director of Homeboy Industries in Los Angeles, the largest gang member intervention program in the country, which provides members with jobs, counseling, tattoo removal, educational opportunities, and more.

In a speech titled “The Power of Boundless Compassion,” Boyle called for standing together with the demonized, “so that the demonizing will stop.”

Extending upon King’s vision of a “beloved community,” Boyle said that we must dispel the belief that some lives are worth more than other lives. “Gang members have taught me just about everything of value in my life,” he said.

Punctuating his powerful speech with anecdotes from his work with gang members, Boyle recalled two particular young men “who used to shoot bullets at each other. Now they shoot text messages.” He told of another pair of rival gang members, thrust together working at the same bakery, who both told Boyle: “I’ll work with him, but I won’t talk to him.”

Boyle said he’d heard that excuse countless times, but the result was always the same: friendship.

And he recalled actress Diane Keaton, who visited Homegirl Café — “where women with records, young women from rival gangs, waitresses with attitude will gladly take your order” — and who was recognized by waitress Glenda, but for all the wrong reasons.

“Glenda looks at Diane Keaton and says, ‘I feel like I know you from somewhere, like we’ve met before.” And Diane sort of deflects it humbly … and Glenda says, ‘No, now I know — we were locked up together!’ ”

With the crowd laughing, Boyle said, “We need to obliterate the illusion that there’s an ‘us,’ and a ‘them.’ ”