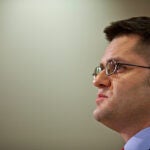 Setting a course for Serbia

Water reforms have increased efficiency of agricultural use

A pair of Australian water experts described the reforms Friday (Feb. 18) in the Geological Museum at an event sponsored by the Harvard University Center for the Environment and the Harvard Water Program.

Australia’s boom-and-bust water landscape has been amply demonstrated in recent months, with several years of drought giving way to torrential rains and the most damaging floods in the nation’s history, punctuated by a monstrous early February cyclone that slammed the country with yet more rain, high winds, and flooding tides.

Will Fargher, general manager of the Australian National Water Commission’s Water Markets and Efficiency Group, and Chris Arnott, managing director of Alluvium Consulting, which advises governments on water issues, described the drought and historic floods as extreme expressions of the natural variability of Australia’s water scene.

Until tamed in recent decades by water engineers, the country’s streams and rivers were far more variable than those in the United States, and it was natural for them to overflow their banks in wet times and run dry in the summer months.

The nation’s key water system is that of the Murray River, which provides water for as much as 60 percent of the nation’s irrigated agriculture in Australia’s southeast. The river has been tamed through a system of dams, weirs, and locks that keeps it navigable.

In the past, farmers were given set allocations that were theirs to use. Though the government was able to reduce allocations in dry times, before the drought began in 2000, they were used to getting 100 percent of their allocated water, Fargher said.

During the drought, water allocations were reduced, putting farmers in a bind.

Reforms enacted in the mid-2000s allowed water prices to rise and fall in a market-based system and let farmers begin trading their water allocations. That gives them the flexibility to better manage their farms in dry years when water prices are high. They can still make money, for example, by not planting and selling their water allocation instead, or by selling part of their allocation and switching to more drought-tolerant crops, or even by buying a neighbor’s allocation to augment their own and going ahead with planting.

The result was a 70 percent reduction in surface water used in agriculture from 2001 to 2008, Fargher said. Startlingly, however, agricultural production didn’t decline much, just 1 percent over the same period, showing both the inefficiency of the prior system and the ability of farmers to manage their business when given flexibility.

“They were stuck in a rigid system where they were unable to reallocate resources,” Fargher said.

The government has also moved to reclaim some water for environmental purposes in an effort to reverse the degradation of water-dependent ecosystems.

John Briscoe, Gordon McKay Professor of the Practice of Environmental Engineering in the School of Engineering and Applied Sciences, professor of the practice of environmental health in the Harvard School of Public Health, and director of the Harvard Water Security Initiative, hosted the event and praised Australia’s reforms. Over the last 20 years, he said, Australia has been one of the most interesting parts of the world with respect to water policy embedded in a larger economic policy.