Talking with their mouths full 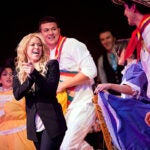 It was an evening of raw and roll.

More than 50 faculty members and guests gathered at the Harvard Faculty Club Thursday (Feb. 24) for “Fish Markets and the Art of Sushi Making,” a seminar and demonstration organized by the Office of the Provost.

The event kicked off with Department of Anthropology Chair Ted Bestor giving a talk on Tsukiji, the largest fish market in the world. As the crowd munched on traditional Japanese foods such as mugwort soba noodles, sushi, and pickled vegetables, Bestor described the 400 species of seafood that pass through the market each day, and the stringent standards the traders there have for fish; they only take the best of the best.

“No matter how good you think the tuna in Boston is, you have to realize when you eat tuna here that it’s been rejected,” Bestor joked. “That fish did not get into Harvard.”

Later, Harvard University Hospitality and Dining Services (HUHDS) Director for Culinary Operations Martin Breslin and John Borgo, sushi chef at O-Bento in Waltham, led the group in a lesson on how to roll sushi and make dashi, a soup stock that is one of the foundations of Japanese cooking. Faculty were suddenly students as they spread nori sheets with rice and attempted to roll fish and avocado inside using straw mats.

“It’s not bad,” said Subir Sachdev, a physics professor, as he tried a piece of the slightly misshapen, yet tasty, sushi roll that he’d made with his wife, Usha Pasi.

“I wish there were more opportunities like this to meet people from other departments,” he said.

The event was the latest in a series organized by the Office of Faculty Development and Diversity (FD&D), designed to periodically gather faculty members in one place and get them talking.

“With scholarship increasingly cross-disciplinary, it’s more important than ever to bring faculty together from across the University,” said Liza Cariaga-Lo, assistant provost for faculty development and diversity. “And food is one of those universal things that people can bond over, regardless of their academic background.”

This year, FD&D is also turning its focus to more local and sustainable food events by working with the HUHDS’ Food Literacy Project. For example, information on the Cape Ann Fresh Catch Community Supported Fishery was offered at Thursday’s event. Starting in March, the Gloucester-based organization will be dropping off fish at Kirkland and Oxford streets as part of the Harvard Farmers’ Market.

Additional food-related events for faculty are planned for the spring, and the FD&D plans to add information to its website about CSA shares and local farmers’ markets. In April, the Office of the Provost and the Food Literacy Project will partner to offer “Eat, Drink and Be Healthy,” an event for faculty that will feature a conversation with Walter Willett, chairman of the Department of Nutrition and Fredrick Stare Professor of Epidemiology and Nutrition at the Harvard School of Public Health, and renowned cook book author Mollie Katzen.