Spotlight on the international 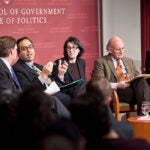 Campus leaders from an array of internationally oriented organizations gathered to discuss challenges raised by the changing nature of global education, the increasing competition to train future leaders, and the best ways to coordinate Harvard’s involvements abroad.

HLS Dean Martha Minow said that although the School has always been active internationally, globalization demands a deeper commitment to sweeping legal education. Increasingly, markets are globalized, meaning that business litigation is as well. There are realignments both within and among nations, meaning that legal systems are changing. Climate change and pollution require global approaches even as the digital revolution binds people closer. The result of all this is that major law firms have overseas offices, Minow said, and topics that once might have been considered purely local often have a global aspect.

That’s why Minow has made increasing the international focus of the Law School a priority. After a recent curricular review, the School now requires students to take an international law class in their first year, and many of the School’s courses have a global aspect to them. Half of the School’s 28 clinics where students gain hands-on experience have an international dimension. In addition, Minow said, HLS has 10 formal exchange programs with law schools abroad and 25 informal programs. International law, Minow said, used to be considered a separate field. Today, it is increasingly an aspect of many areas. Minow said law schools are being established in other countries and are competing with HLS for students.

HBS Dean Nitin Nohria described a similar dynamic at work among business schools. Nohria said such schools are being established rapidly in China, India, and other nations. Although HBS has research centers in various countries, it shouldn’t try to compete with all of these new schools for students, most of whom will move into the local business community. HBS, he said, probably won’t be able to understand local business environments as well as the schools located there do. HBS’ strength, he said, will be to understand what’s going on around the world in business, to identify trends and provide analysis and leadership on a global basis.

Nohria said the global environment for business schools is changing rapidly. In the past century, HBS focused on the American business model, which, because of U.S. strength in global markets, brought international students here to understand better how this system works. This century, however, will see a true globalization of business, Nohria said, so HBS must change to reflect that.

Such shifts are already under way. In addition to having seven research centers that provide support for faculty efforts overseas, HBS’ teaching cases have become more international, with a third containing such a component. First-year students are required to have an international experience during the winter break. Half of HBS faculty say they spend a third of their time on global research.

“Our edge is … that we can bring to anyplace in the world the best global thinking,” Nohria said. “If we can do that, I think the best and the brightest from around the world … will still choose to come to us.”

For the last 20 years, international students have come to Harvard in increasing numbers, according to Jorge Dominguez. The enrollment of international students has risen from 1,600 to 4,300. Today China ties with Canada for having the most students from abroad at Harvard, both with 541. South Korea beats out the United Kingdom for third place, while India beats Germany for fifth. Other countries with many foreign students at the University include Singapore, Japan, Australia and Turkey, Dominguez said.

Dominguez credited the work of faculty and students long before he took his post in 2006 for broadening the international student mix. Harvard hires the best and brightest to its faculty regardless of their nationalities, and faculty members conduct research in many nations on many topics. In addition, students have been increasingly encouraged to incorporate international experience into their studies.

“A majority of seniors, on the eve of their commencement, say they’ve had significant international activity. That’s very different from even 10 years ago,” Dominguez said.

But Minow said there still are questions about what are the appropriate relationships to have with other institutions, about whether the Law School should be figuring out its strategy alone or in collaboration with other Harvard Schools, and how important a study abroad component should be for law students.

Though Nohria cautioned against imposing too many requirements on faculty members and students because that might blunt the energy and creativity of their international efforts, Dominguez said some type of coordination is needed. When he took office as vice provost for international affairs, Dominguez said, nobody knew exactly where faculty members and students were working overseas. Violence in Lebanon shortly afterward highlighted the danger of that ignorance and hampered the University’s efforts to get its affiliates out safely.

Today, Dominguez’s office maintains a database on Harvard’s international activities, viewable on the Harvard Worldwide website, which is maintained by exhaustively combing faculty sites for information.

“No professor wants to be told what to do, but we do need to figure out a way to be more effective,” Dominguez said.

To that end, President Drew Faust has convened a working group on international strategy, chaired by Nohria and with representatives from each School, to examine what Harvard is doing today, how well that’s working, and what it should do in the future.