Shock amid the service 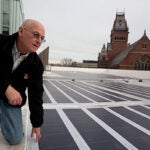 Turning on the lights

Seeing, doing among the Navajo in New Mexico

Grants, N.M., is a small city just east of the Continental Divide. Its population is roughly equal to that of Harvard College and its per capita income — about $14,000 — would buy two semesters of room and board.

Last month, Grants was home base for 10 undergraduates on a service trip sponsored by the Phillips Brooks House Association.

During the 10-day trip, students also delivered firewood and food to elderly Navajo in remote parts of the reservation. (One of them was Joe Vandever, one of the last surviving Navajo Code Talkers from World War II.) The deliveries, guided by employees of the St. Bonaventure Indian Mission and School in Thoreau, N.M, meant navigating unpaved muddy roads in two borrowed Ford Expeditions.

The vehicles turned into unmarked canyons and skidded up mountain heights to reach homes that were often just battered trailers or hogans with slumping roofs and broken windows.

“It was very tough to see, “ said Shalini Pammal ’13, whose only other experience with poverty had been as a high school volunteer at a charity hospital in India. “It’s something you really can’t prepare yourself for. At Harvard, we are so blessed.”

She helped deliver firewood to an elderly woman on dialysis, and to an old man who spent his days sitting in his truck reading the Bible. “His faith was all he had left,” said Pammal, who plans on a career combining medicine and social justice.

Friends were shocked to hear of Third World poverty in a corner of America, said Sesheta Mwanza ’13. “They don’t have to go abroad to see social injustice.”

The trip inspired the film and video concentrator in the Visual and Environmental Studies program to make a documentary. The Navajo Nation is a place no one ever really sees, said Mwanza, and its poverty (and dignity) is seldom portrayed in the media.

Before going, the students underwent training at the Harvard University Native American Program. It included an overview of the federal Indian Health Service, the current state of Native American health, Navajo culture and language (“ya-at-eeh” is “Hello”), and a look at weather in that dry corner of New Mexico, where winter temperatures can dip below zero.

Executive Director Shelly Lowe, a Navajo, said knowledge and cultural respect are vital before taking such trips. “They can have practical value if the students are adequately prepared.”

Undergraduates also remarked on the dramatic desert landscape of mesas and mountains — “a maze that was created by a divine power,” said Mwanza.

“People who live in this region get to witness this beauty,” she said, but at the same time find it hard to obtain enough food and potable water, or a good education.

“There’s a lot of hard stuff to see there,” said Amanda Gokee ’14, a Native American who grew up in Vermont, but who before New Mexico had never witnessed reservation poverty. She called it her “first experience with the Third World.”

That included some of the four Head Start locations the Harvard team visited. Some were “pretty bare,” said Gokee — little more than “a small room, a bathroom, and a hallway.”

But at the same time, she was moved by the resilience and dignity of the Navajo and by the energy and happiness of the children. “They’re still kids . . .  still running around and smiling,” said Gokee. “It gave me a lot of hope.”