Setting a course for Serbia 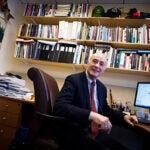 Jeremic, 35, assumed the foreign ministry leadership in 2007. His election and global visibility on behalf of Serbia are an “inspiration to all of us,” said Graham Allison, Douglas Dillon Professor of Government and director of the Belfer Center for Science and International Affairs. Allison introduced Jeremic and noted the talk’s date corresponded to the third anniversary of Kosovo’s Unilateral Declaration of Independence (UDI) from Serbia.

Jeremic did not acknowledge the Kosovan anniversary in his prepared remarks. Throughout his 30-minute talk, he credited Serbia for its attempts to negotiate with Kosovan leaders since 2008.

Jeremic focused first on the political moment in the Balkan region, known previously as Yugoslavia and the former Yugoslavia (now as the Western bloc).

“We missed the significance of the Berlin Wall falling in 1989 and tragedy followed,” he said, referring to the destructiveness of Slobodan Milosevic, dictatorial president of the former Yugoslavia from 1989 to 2000. Unable to deter or dislodge Milosevic, NATO forces bombed the area, and the UN Security Council placed Kosovo under NATO protection in 1999. At the time, Jeremic belonged to Otpor, a youth reform movement that was crucial to Milosevic’s overthrow.

“We intend to avoid the mistakes of the past. The road to Europe is the road to the future. Prosperity is essential to the Balkans,” he said, for its own sake and for the sake of admission and participation in the EU. But democracy and a market economy within Serbia require national and regional stability to flourish.

That’s where Kosovo comes in. Milosevic’s forces brutalized Kosovo for a decade. Its “independence was — was — seen as an inevitable consequence. I’m not minimizing those horrors or the ghastly oppression of the Albanians. But Milosevic’s atrocities were not unique,” Jeremic said.

“Difficult issues of sovereignty and territory have been resolved before. The 1998 Good Friday Agreement in Ireland is one example. We are not going to say no in advance to any outcome of negotiations with Kosovo.”

In a heated moment, he added, “As someone who risked his life to overthrow Milosevic, I find it distasteful to be accused of using his policies.”

Jeremic asserted a flat “never” to “the forceful partition or unilateral independence of any part of our country. Imposition of political solutions is the past, the old Europe. And it’s the road to hell in the Balkans.”

Kosovan-style unilateral declarations of independence could also be the road to hell in nations such as Indonesia or Spain. “Kosovo’s UDI would be a dangerous precedent,” Jeremic noted.

Jeremic responded with seamless amiability to questions from Kosovans in the audience.

Having described Kosovo as a “failure” — he cited corruption, dizzying unemployment, and human rights abuses such as sex and organ trafficking — he admitted he had never been there.

“I’d like to go. I wanted to attend the enthronement of Patriarch Irinej [head of the Serbian Orthodox Church], but the provisional government wouldn’t let me in,” he said.

As for U.S.-Serbian relations, “There’s a big gap between us on Kosovo. Regrettably, the Bush administration actively encouraged the UDI. Sometimes it’s hard to work with you guys. But I’m optimistic about our future,” he said.

The Jeremic talk was sponsored by the Kennedy School’s Kokkalis Program on Southeastern and East-Central Europe and the Harvard GSAS Serbian Cultural Club.