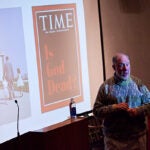 Getting ready to travel home for the recent winter break, I packed books on authoritarianism, installed Tor to avoid being monitored on the Internet, and deleted some political cartoons from my computer. I was flying to Belarus to see my family and to research civic activism.

Three days earlier, Belarus had what was only its fourth presidential election. The winner was certain. President Aleksandr Lukashenka has ruled the country since 1994, which inspired a popular joke that running for president of Belarus requires a 10-year presidential experience. Expecting nothing unusual, I did not follow the election process.

A Ph.D. student in Harvard’s Department of Government, I learned about massive protests in Minsk only when contacted by a foreign news network. Reading the Western media that was suddenly rife with horror stories there, I grew anxious. Tens of thousands of people took to the streets to protest voting irregularities. Hundreds of people were beaten and detained; oppositional presidential candidates were arrested.

Listening to an interview with a journalist in Minsk, I could hear thousands of my countrymen chanting “Long live Belarus” and “Go away!” to the incumbent president. To me, this was remarkable. Few dare to dissent in Belarus, where statues of Vladimir Lenin are ubiquitous, the streets bear Soviet names, and Josef Stalin has a memorial complex.

This time, however, something seemed to have snapped. Belarusians participated in the largest protest rally since 1996, traveling from all over the country to Independence Square in Minsk on election night. Although the protest was crushed, I was sure I would come back to a different country from the one I had left in August.

But on my return, I found nothing changed. The postelection arrests continued, and so did the Western criticism. But most people seemed unaware of this. Those who hadn’t had their doors knocked on by the Belarusian security services seemed to know nothing. The rest appeared too afraid to speak. While the Western papers decried the situation, the headlines in the Belarusian state media read “Fair competition for votes in Belarus” and “Belarus election follows EU, USA instructions.” What some Belarusians recognized as hypocritical in private was believed by many others, whose votes were reflected in the outcome.

My high school friend, a Ph.D. student at Belarusian State University, was surprised to hear that the election might be unfair and was oblivious to the post-election violence. Like most Belarusian students, she voted early: Offered to skip a week of class by her lecturer, she didn’t question the early balloting. My neighbor, who made it a rule to come to the election booth five minutes before the voting closes, told me he invariably finds that someone already has voted in his name.

In November, the Harvard Ukrainian Research Institute and Davis Center sponsored a lecture, “The Two Souls of Belarusian Literature: Anatomy and Pathology,” by young Belarusian poet Mariya Martysevich. Martysevich spoke of one Belarusian literature endorsed by the state and taught in schools, and another representing the country abroad, but blacklisted in Belarus. It seemed that Belarus itself had two souls.

Small and ethnically homogenous, the country remains divided. It has two flags, one used by the opposition and sold at some Western souvenir shops, and the other adorning governmental buildings and classrooms in Belarus. The country even speaks two languages. Russian is used in daily life and dominates the state media, but Belarusian is spoken as a political statement by the opposition. So Belarus has two stories. Year after year, those stories drift further apart. Although one may be more accurate, neither is complete by itself.

Trying to bring the two together is challenging. Although I had planned to interview Belarusian human rights activists during my visit, I had better luck reaching Belarusians in exile and foreign activists, who told me what I knew from the Western media. Most of my interviews scheduled with activists did not happen. In the postelection turmoil, they would not risk speaking about their work, and many were busy helping out their jailed friends.

But the stories I did hear were far less dramatic than those reported abroad. Ordinary Belarusians stayed away from politics and were satisfied with their lives, albeit a little annoyed at the difficulties of obtaining visas to Western countries. Some joked about Belarus’ reputation abroad, but pointed out that all countries had problems. In the world they see on the news, the West is a land of crime, obesity, and unemployment; the Tunisian revolt never happened; the Egyptian revolution spells trouble and uncertainty for the local people; and Belarus is an island of stability safe from outside unrest, natural disasters, and poverty.

Flying back to the United States a month later, I decided not to bring souvenirs with the Soviet symbol, which are popular with some of my American friends. I came back instead with a book of Belarusian poetry and a desire to bring the two stories of Belarus closer together.