Harvard lends a hand to Chile 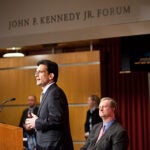 President, faculty to travel there for quake-recovery meeting

The 8.8 magnitude earthquake that struck Chile a year ago was so strong it nudged the Earth’s axis and ever so slightly shortened the length of a day. Even after months of rebuilding, the damage is still apparent, according to Harvard faculty members working on earthquake relief.

“It looks post-nuclear,” said Brad Epps, professor of Romance languages and literatures, describing the coastal town of Dichato, devastated by both the quake and the tsunami that followed. Epps led a group of 15 Harvard students to Dichato and elsewhere over winter break to help the rebuilding effort. They worked to reconstruct parks, schools, and kiosks to get local commerce moving.

The trip is just one of several ways in which the Harvard community has reached out to help Chile. Faculty members lead a number of projects there, and alumni are playing key roles in the reconstruction. Some projects, such as ENLACE, a planning and research effort by Chilean students in the Boston area, and organized by Daniel Hojman, associate professor of public policy at the Harvard Kennedy School, grew from the quake’s aftermath. Others, such as Un Buen Comienzo (A Good Start), an early childhood program run in schools near the capital, Santiago, existed before the quake and are being extended to quake-stricken areas.

With the regional office of the David Rockefeller Center for Latin American Studies in Santiago, Harvard has a base from which such efforts can be coordinated. Ned Strong, who directs the office, said that, in the days after the quake, Harvard faculty members involved in Un Buen Comienzo traveled to displaced-persons camps to provide mental health assessments of children there who may have been traumatized by the disaster.

In addition, he said, alumni affiliated with the Harvard Club of Chile delivered two planeloads of medical supplies. Alumni hold key positions, such as planning for coastal reconstruction with an eye to prevent tsunami-related damage in the future. Pablo Allard, another alumnus, is in charge of coordinating the reconstruction efforts of the Chilean Ministry of Housing. Chilean President Sebastián Piñera also has strong Harvard ties, having received a doctorate in economics at the University in the 1970s.

Harvard is assisting the broader planning effort, which Chilean officials say will run three years. Harvard President Drew Faust plans to visit Chile at the end of March and attend a meeting of Harvard faculty members, government officials, representatives of nongovernmental organizations, and private companies involved in reconstruction. The group will discuss public health and mental health issues stemming from the destruction, efforts to prevent and minimize damage from other natural disasters, and long-term planning for the reconstruction.

Other faculty members involved in the meeting include Hojman; Judith Palfrey, Brazelton Professor of Pediatrics; MaryCatherine Arbour, instructor in medicine at Harvard Medical School; Doug Ahlers, adjunct lecturer in public policy at the Harvard Kennedy School; and Miho Mazereeuw, lecturer in landscape architecture at the Graduate School of Design.

The Chilean government has received praise for its earthquake preparation and response. Though the quake was significantly larger than the one that devastated Haiti, the death toll was far smaller, about 500, compared with more than 300,000 in Haiti. Despite the lower death toll, the quake and tsunami destroyed many buildings, roads, and other infrastructure. Strong said an estimated 280,000 families remain in temporary housing and in displaced-persons camps that vary widely in their access to sanitation and clean water.

Arbour, who is also a physician at Harvard-affiliated Brigham and Women’s Hospital, said the mental health assessments done by her and Palfrey, who practices at Harvard-affiliated Children’s Hospital, involved adapting survey instruments to assess children’s nutrition, access to education, and access to social support and to measure the impact of the quake on their family structure.

Arbour and Palfrey are among the Harvard faculty involved with Un Buen Comienzo, which also includes faculty from Harvard’s Graduate School of Education. Among those involved are Catherine Snow, Graham Professor of Education, and Hiro Yoshikawa, professor of education. The project is conducted in tandem with Chile’s Ministries of Health and Education, Universidad Diego Portales, the private foundation Fundación Educacional Opportunidad, and other partners.

Arbour said the effort is being conducted as a research program to see if this type of intervention can be effective. In populations struggling with different challenges, the research can be extended to examine new questions.

“The government’s disaster response was pretty remarkable for how quick and coordinated it was,” Arbour said. “The trouble with a disaster is that you’re never going to be satisfied, even if you’re doing a good job, because it’s [still] a disaster.”