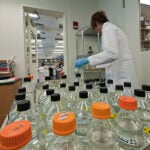 For the first time, researchers have laid bare the full genetic blueprint of multiple prostate tumors, uncovering alterations that have never before been detected and offering a detailed view of the genetic missteps that underlie the disease. The study, made possible by key advances in whole genome sequencing and analysis, points to several new prostate cancer genes and a critical category of genomic changes as important drivers of prostate cancer growth. The work was led by researchers from the Broad Institute of Harvard and MIT, Dana-Farber Cancer Institute, and Weill Cornell Medical College. It appears in the Feb. 10 issue of the journal Nature.

Unlike other sequencing methods that target specific sections of the genome, whole genome sequencing enables researchers to look across the entire DNA landscape of a tumor, making it possible to discern global changes and patterns. Senior authors Levi Garraway and Mark Rubin and their colleagues used this strategy to view the complete genomes of seven prostate tumors and compare them with normal tissue samples to find regions of abnormality.

“Whole genome sequencing gives us fascinating new insights into a category of alterations that may be especially important in prostate cancer,” said Garraway, a senior associate member of the Broad Institute and an assistant professor and medical oncologist at Harvard Medical School and Dana-Farber.

Prostate cancer is the second most lethal cancer in American men, responsible for more than 30,000 deaths and more than 200,000 new cases each year. A major goal of prostate cancer research is to identify potential drug targets as well as genetic characteristics within tumors that could distinguish indolent and aggressive forms of the disease, and ultimately improve diagnostics and treatment.

Rubin, the Homer T. Hirst Professor of Oncology in Pathology and vice chair for experimental pathology at Weill Cornell Medical College, compares the Nature study to looking not just for spelling errors in the genome, but also for whole paragraphs or sections of genomic text that have been rearranged. One of the big surprises is the fact that prostate cancer doesn’t have a large number of misspellings, but instead has a large, significant number of rearrangements, said Rubin. “We would never have guessed that there were so many genomic alterations of this type before now because we didn’t have the right tools to look for them.”

These alterations are known as “genomic rearrangements,” a kind of shuffling that occurs when a piece of DNA from one part of the genome breaks off and reattaches itself in another location. These rearrangements can create new genes (called “fusion genes”), allow a gene to operate unchecked, or prevent a gene from even working at all. Such changes can set a cell on a path toward cancer. By looking for genes affected by these rearrangements in multiple prostate cancer samples, the researchers unearthed new genes tied to the disease and found new mechanisms that may be driving cancer as a whole.

“This first whole genome view shows us tantalizing evidence for several new prostate cancer genes that likely would have remained undiscovered had we not been taking a genomewide approach,” said Garraway.

Several tumors contained rearrangements disrupting the gene that codes for the protein CADM2, part of a family of proteins that prevent tumors from forming (known as “tumor suppressors”). Three samples also contained mutations involving members of the heat shock protein family, molecules that play an important, protective role and keep proteins from losing their proper shape. Anti-cancer drugs that inhibit these proteins are currently in clinical trials, but it is not yet clear whether prostate cancers will be vulnerable to such drugs.

Other recurring genomic rearrangements involve the genes PTEN and MAGI2. PTEN is a well-known tumor suppressor gene and MAGI2 appears to be its helpmate; mutations to one or both genes may set cells on the path toward becoming cancerous. Drugs that inhibit the pathway these genes influence are also being developed, raising the possibility that the drugs could be applied to prostate cancer.

In addition to uncovering new and suspected genes, whole genome sequencing has also given Garraway, Rubin, and their colleagues insights into how genomic rearrangements arise in the first place. With a catalog of rearrangements in hand, the researchers looked for where breaks and reattachments tended to occur, and found that these events are not distributed randomly across the genome. Rather, in some tumors these events tend to take place in areas of the genome that are inactive or silent, while in other tumors they occur in regions that are highly active. This pattern suggests that mistakes made by cells while turning genes on and off might give rise to DNA rearrangements and therefore play a formative role in cancer’s development.

The researchers’ findings may also provide a key starting point for the development of new diagnostic tools for prostate cancer. Currently, when patients are diagnosed with prostate cancer, it is almost impossible for doctors to determine if the disease will advance quickly and therefore require aggressive treatment, or whether the tumors will remain slow-growing, necessitating a wait-and-see approach. “This study could enhance our ability to develop new, diagnostic markers for prostate cancer,” said Rubin. “We can also imagine eventually developing more personalized diagnostic tools for patients with recurrent tumors, to essentially follow the tumors’ progression by testing for new genomic alterations.”

Although the researchers’ findings need to be studied further and extended to larger numbers of tumor samples, this initial analysis has opened up many new avenues of investigation, underscoring the power of applying whole genome sequencing to cancer.

“Many of these features were invisible before,” said Garraway. “Now, we’re realizing that by sequencing whole genomes in prostate cancer, there’s a lot more to see. These discoveries are teaching us a great deal about prostate cancer biology that we simply hadn’t appreciated previously.”