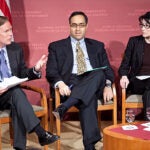 “I want theater to look like this,” said Diane Paulus, artistic director of the American Repertory Theater (A.R.T.), gesturing dramatically at a PowerPoint slide that looks like it was taken in a packed 1970s nightclub, glitter ball and all.

The slide, however, shows the A.R.T. production of “The Donkey Show,” which set Shakespeare’s “A Midsummer Night’s Dream” in a disco and had audience members standing up and dancing alongside actors. The production represents Paulus’ vision of theater that actively engages the audience, tearing down the invisible wall between actors and attendees.

Likewise, many schools are turning to new forms of education that break the mold of static lectures and passive listeners.

Examples of this kind of “active learning,” matched with new classroom technologies and the evolving role of the instructor, were highlighted on Friday (Feb. 11), in the first of a series of campuswide dialogues on teaching and learning called “Conversations@FAS: Redefining Teaching and Learning for the 21st Century.”

Schools are going “beyond the traditional college lecture format in which the student is simply a passive listener,” said Michael D. Smith, dean of the Faculty of Arts and Sciences (FAS), in his opening remarks.

“Overall, the practice of supplementing traditional classroom teaching with more hands-on experiential learning is common to a very large number of courses taught at Harvard and truly transcends disciplinary boundaries,” Smith told a group of about 122 people in Maxwell Dworkin G115.

Determining the actual number of attendees was part of the presentation by Malan, who has been applying innovative techniques in teaching introductory computer programming for his popular CS 50 class.

Malan illustrated “logarithmic growth” or improving the speed of searching through massive amounts of data by having audience members interact and use a formula to count themselves, instead of having him painstakingly count each person. To everyone’s delight, including Malan’s, the system worked and the audience got a demonstration of new ways to look at old techniques.

“We do this in the very first lecture of CS 50,” he said. “It’s one thing to represent the notion of an algorithm formulaically, but it’s a lot more memorable and compelling to actively see and feel what that algorithm would actually be like.”

Winship described the evolution of his own thinking about interactive learning, sparked in part with his efforts to develop statistical models for evaluating educational programs in Boston’s Dorchester and Roxbury neighborhoods — an experience that showed him the challenges of applying academic models to the real world.

Research shows that, on average, after 10 minutes a student tends to tune out, Winship said.  In his course on “Reinventing Boston,” he encourages students to break out of the “Harvard Square bubble” by having them work on projects that use Boston neighborhoods as living subjects for field research, interviews, and demographic analysis.  The goal is to “show students the connections between the classroom, the real world, and the lives they really want to lead,” he said.

“Theoretical, conceptual models are enormously important to help us think, but testing them against the real world is absolutely critical and is what pushes our thinking to become more sophisticated,” he said.

Active learning can take myriad forms. Paulus, who has co-taught Shakespeare classes while the A.R.T. presented Shakespeare plays, said that she will teach classes on “Porgy and Bess” in advance of an upcoming A.R.T. revival of the famous George Gershwin opera.

“I really believe that my interaction with students and what I hear from them will actually impact the production,” she said. “Because part of doing  ‘Porgy and Bess’ in the 21st century is ‘What do we make of this work?’ and ‘How do we place it in a context that has meaning for our audience?’”

While Malan uses new technology — like online recordings of his lectures and live chats — to help students grasp the details of programming, he also uses the model of the high school science fair for the popular CS 50 fair in which students show off programs they created. The class even hosted an all-night “Hackathon” in which students — fueled by pizza and 2 a.m. Chinese food — worked all night on problems and helped each other through the night.

Befitting the topic, the question-and-answer period was lively. Panelists were questioned about whether rigorous evaluation has proven the effectiveness of active learning, whether it works better for some subjects like languages, how instructors grade in an active learning environment, and whether activities like reading are, in fact, an “active” form of learning. Several participants argued that Harvard should do more to teach better ways of teaching across all its disciplines.

Future topics for Conversations@FAS will include  “Instilling a Global Perspective” on March 25 and “Teaching With Collections” on April 1.