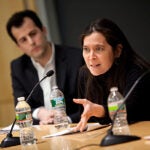 When, after several years of studying America’s religious demographics, Robert Putnam says he’s become obsessed with the “rise of the nones,” it’s easy to misinterpret him. But he’s not talking about an order of Catholic sisters.

The renowned political scientist is instead referring to the astonishing growth in the number of Americans, believers and nonbelievers alike, who identify with no particular religion. While that figure used to remain constant at 5 to 7 percent of the population, it has risen sharply since 1990. Now, 17 percent of citizens claim no religion, and nearly three in 10 young people are “nones.”

Americans are “beginning their lives at a much lower level of religiosity than any previous generation of Americans ever has,” Putnam told a crowd at Harvard Divinity School (HDS) on Tuesday evening (Feb. 15).

Although the vast majority of Americans still believe in a higher power, Putnam argued, many are increasingly opting out of religion, in part because it has become more politicized in recent years.

Putnam, Peter and Isabel Malkin Professor of Public Policy and former dean of the Harvard Kennedy School, appeared at Andover Hall to talk about his latest book, “American Grace: How Religion Divides and Unites Us,” written with David E. Campbell, a political scientist at the University of Notre Dame.

The talk, the first in a semesterlong series, was sponsored by the HDS Student Initiative on Religion and Government and the Office of Student Life at HDS. The idea for a speaker series arose when HDS students taking courses in other Schools noticed a lack of cross-disciplinary collaboration on religion, said John Coggin, HDS ’11, the event organizer.

“We quickly realized there was not much conversation going on among the Schools, even among faculty who were studying much the same thing,” Coggin said. “We wanted to get people talking.”

Putnam is known for doing just that. His 2000 book “Bowling Alone: The Collapse and Revival of American Community,” which examined the role of social networks (the old-fashioned, pre-Facebook variety) in American civic and political life, has become one of the most cited works of social science of the past several decades.

He has since turned his focus to American religion, polling a group of 3,000 Americans in 2006 and again in 2007. The comprehensive surveys, combined with case studies of 13 churches across the country, provide the backbone of “American Grace.”

What the data show, Putnam said, is that America is a remarkably devout, religiously diverse, and surprisingly tolerant place. The United States ranks highly on international surveys of religious belief, and despite the wide range of faiths practiced here, he said, Americans rate all religions favorably. Jews and Catholics were seen most favorably in Putnam’s surveys, while Muslims and Buddhists were rated least favorably, but the differences in public opinion toward each group were not vast.

Yet despite Americans’ tolerance, we’re still a politically polarized country — a dichotomy made all the more curious by the fact that Americans’ religious beliefs have become much more closely correlated with their political preferences since the 1970s.

Have Americans changed their religion to fit their politics, or vice versa?

“When we began this research I was certain I knew the answer,” Putnam said. Surely Americans were adjusting their political views based on what they were hearing in the pews on Sunday, he thought. “Otherwise, it just didn’t make sense.”

What he found, however, was that two-thirds of survey respondents whose beliefs had shifted were switching to religions that more closely fit their politics.

“Much of the polarization in America is driven by politics, not by religion,” Putnam said.

That could explain why young people have been fleeing organized religion in droves, and why the once-growing ranks of evangelical Christians have stagnated since 1990. According to Putnam, the biggest predictor of whether a person identifies as non-religious is whether he or she is accepting of homosexuality.

“They’re not atheists,” Putnam said of young people. “But for most of them, the brand of religion means Jerry Falwell.”

Putnam also explored another surprising finding: that “if you go to church, you’re nicer.” Whether one looks at measures of community involvement, civic engagement, or charitable giving, he said, “Religious people are better neighbors and better citizens.”

But the finding wasn’t tied to the content of churchgoers’ beliefs (although most faiths do preach kindness and generosity) or even to how devout a person is. Rather, altruistic behavior correlates most strongly with how many “church friends” a religious person has, he said.

In his earlier work, Putnam created a neat metaphor to illustrate his data on how group activity helps create a healthy civil society: Bowling in a league is better than bowling alone. As it turns out, he told the HDS crowd, “Bowling in church leagues — that’s the real deal.”