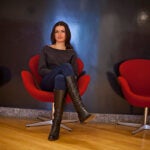 Economist Gopinath uses both theory and data to learn truths

It’s not often that shoveling snow inspires a discussion of foreign exchange rates. But that’s what happened when economist Gita Gopinath offered her 7-year-old son Rohil $10 for helping out. He insisted on being paid in rupees — 45 of them for every dollar.

“He gets to hear more economics than he needs at the dinner table,” said Gopinath, the first Indian woman with tenure in Harvard’s Department of Economics.

Her husband, Iqbal Dhaliwal, is also an economist, and is director of policy at the Abdul Latif Jameel Poverty Action Lab at the Massachusetts Institute of Technology. At home in Lexington, Mass., Gopinath said, “We keep exchanging notes.”

Gopinath, who is 39 today and was barely 38 when she earned tenure, is a rising star in international macroeconomics. Her research interests are timely, considering the volatile financial state of the world.

To do her work, Gopinath explores both theory and hard data.

Some of her papers are based purely on mathematical formulations. “I try to model the world with features I think are relevant,” she said, “and then see what the behavior of economic agents are in that environment.”

But Gopinath also burrows into mounds of data. What she calls her “pricing project” tracks the cost of goods in minute detail, down to the expense of a pair of shoes from China or a machine made in Germany. Since 2005, she has analyzed the voluminous data behind the import price index that is released monthly by the U.S. Bureau of Labor Statistics.

All this, and yet Gopinath paid no attention to economics until a first-year course at the University of Delhi in 1989. “When you’re growing up in India, everybody expects you to become a doctor or an engineer,” she said, “not exactly an economist.” But Gopinath picked economics to prepare for an exam three years in the future, the one required for acceptance into the elite Indian Administrative Service.

Then two things happened. In 1990-91, India experienced a massive financial crisis. “I got really excited by economics at that point,” said Gopinath, who became a fervent student of currency values, depreciation, bailouts, and capital flow. “I fell in love with the subject.”

Around the same time, Gopinath also discovered that “I had absolutely zero administrative skills,” she said, which made academics more attractive than a government career. “I was more of a geek, and better with my books than anything else.”

After earning a master’s degree at the Delhi School of Economics (1994), where she met Dhaliwal, Gopinath earned a master’s in economics from the University of Washington, Seattle, where she had started a Ph.D. program.

She transferred to Princeton University in 1996 and earned a Ph.D. there in 2001. Along the way, she was inspired to pursue international macroeconomics by her two advisers. Kenneth S. Rogoff, former chief economist at the International Monetary Fund, is now Harvard’s Thomas D. Cabot Professor of Public Policy and a professor of economics. Ben Bernanke is now in his second term as chairman of the Board of Governors of the Federal Reserve System.

After less than four years at the University of Chicago, Gopinath was offered a semester-long visiting position at Harvard in the spring of 2005. “At the end of it, surprisingly,” she said, “they made me an offer.”

Since then, there is little time for anything except work and family. “I really would like to spend more time reading books that are not textbooks,” said Gopinath.

Still, the shelves in her new office are nearly bare, since, said Gopinath, “Everything I need is on the Internet now.”