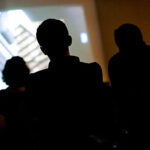 Three graduates return to discuss their work, and then display it

Is there life after Harvard? One sort of answer comes today (Feb. 3) when three artists, all graduates of the Visual and Environmental Studies (VES) program, revisit their alma mater for a discussion of lessons learned and art done beyond college.

The panel is part of “Object Lessons,” an exhibit of work by the artists Liz Glynn ’03 of Los Angeles; Meredith James ’04 of New York City; and Xiaowei Wang ’08, now a landscape architecture student at the Harvard Graduate School of Design.

The show, which is wry and quirky, runs through Feb. 20 at Harvard’s Carpenter Center for the Visual Arts. Among the mixed media, video, and installation work is a short 2009 video by Glynn, the title of which is a kind of anthem for artists: “No Resistance Is Futile.”

Six milling figures, recorded from above, struggle to control a tall bundle of lumber tied at the middle. Their resistance is not futile; it makes art. The linear stack collapses into a gorgeous, starlike pile that illustrates what futurist Buckminster Fuller would call “tensegrity,” the beauty-making balance of tension and compression that undergirds nature.

“Object Lessons” also includes a work about what most artists seek and seldom get. “Applause” (2010) is a contraption composed of a chair, a motor-driven bicycle chain, and rubber hands that clap.

“As an artist, you end up having to be your own audience a lot, because you’re alone so much of the time,” said James. “So I did that to have my own audience.”

“Object Lessons” includes two videos by James, which in part work out her obsession with the built environment. (“I grew up in a New York City apartment,” she said, which fueled her fascination with old houses out of scale with those of her childhood.)

“Present Time” (2009) features ornate doors, high mirrors, spacious rooms, and building facades that the artist climbs up and down as if she were on a jungle gym.

“Day Shift” (2008) features a cramped office the size of a coffin. The set is part of the exhibit: tiny windows, miniature venetian blinds, a tiny chair, and a child-sized desk. “When I started building things with house parts,” said James, who plays a security guard in the video, “it had something to do with wanting to twist up space.”

Twisting up space may be the soul of video. “You can play with reality just slightly,” she said, “and peoples’ imaginations fill it in.”

Art has a way of twisting up time too. On display is Glynn’s “The 24 Hour Roman Reconstruction Project” (2008). In the video, workers at cartoonish speed construct a replica of Rome in a day, and then destroy it.

Wang is not out to wreck the Carpenter Center with her share of the exhibit. But she at least wants to argue with it. Her banners, frames, and lichen-smeared bricks are all set up outside the iconic 1963 structure, the only building in North America designed by Le Corbusier.

“Why should he be so important?” said Wang of Le Corbusier (1887-1965), a designer with a monumental reputation. Her part of the exhibit adds hints of nature to “a difficult building for anything to grow on,” she said. The hanging Tyvek banners waver like water in the wind, and in just weeks Wang’s bricks will sprout lichen.

Wang said the VES program prepared her to be an artist, but also to be anything else. James, who was once Glynn’s roommate at Harvard, said VES was a place to make lifelong friends, who at first “were the only people who would look at my work.”

James remembered being wowed years ago by her accomplished freshman peers. But no one arrived on campus knowing everything about drawing, animation, or film, she said. “Art was one of the only places you could start from scratch.”