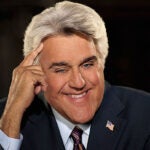 Leno is Man of Year

Faust, fitness experts kick off Harvard on the Move

If November and December are marked by a battle of will vs. appetite, then January and February pit our well-meaning brains against our unmotivated feet. As many a New Englander can attest, it’s hard to get out and exercise when freezing temperatures and seemingly endless snowfalls loom.

But to Harvard biologist and barefoot running enthusiast Daniel Lieberman, that’s no excuse to sit still.

Inclement weather didn’t stop a large crowd from turning out at Sanders Theatre to learn how to overcome the winter blues and get motivated. The event kicked off Harvard on the Move, a running and walking program designed to build community and fitness among students, faculty, staff, alumni, and members of the community. The program, sponsored by President Drew Faust and coordinated by the Center for Wellness, will include weekly runs and walks open to the public.

The initiative will also highlight “the fundamental mission of the University to translate research into practice,” Faust said. With that in mind, panelists discussed the latest findings on how regular running (or walking) can improve mental, physical, and emotional health.

Lieberman, professor and chair of human evolutionary biology, was joined by John Ratey, an associate clinical professor of psychiatry at Harvard Medical School, and Christopher McDougall ’85, a magazine journalist who has chronicled extreme running cultures around the world.

Humans are built for movement, Lieberman said, but our daily activities don’t give us the bursts of activity we need. “We still have those Paleolithic bodies, but we live 21st century lives,” he said.

Perhaps because of the way humans have evolved, regular running has a host of positive effects on our minds and bodies, Ratey said. Studies have found that sedentary middle-age people who took up exercise were able to push back cognitive decline by 10 to 15 years, he said. Ratey has also prescribed running to treat attention deficit disorder and depression.

McDougall, more adventurer than scientist, emphasized that running should be fun. The “ultrarunners” he has written about can win 100-mile races, he said, not because they train their bodies the hardest, but because they don’t.

The panelists took questions from the audience on the usual anxieties: what to eat before a run, how fast and far to go, and how to run in less-than-ideal weather. The answers to most running questions, the panelists agreed, come down to listening to one’s body — whether that means eating more carbohydrates, drinking less water, or making the decision to go shoeless.

“If it hurts, stop,” Lieberman said. “There’s this idea that you should run through pain. … I think pain is a symptom that something’s wrong.”

The talk was followed by an informational fair, where faculty, staff, and students could have their gaits analyzed by specialists and buy signed copies of the panelists’ latest books: Lieberman’s “The Evolution of the Human Head,” Ratey’s “Spark: The Revolutionary New Science of Exercise and the Brain,” and McDougall’s “Born to Run: A Hidden Tribe, Superathletes, and the Greatest Race the World Has Never Seen.”