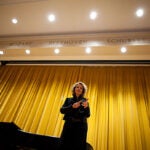 Eyes on the stage

Pianist discusses the beauty of the atonal

The tune is atonal. The computer-generated melody is based on a chant by Anatolian monks. But can it be considered beautiful?

Absolutely, says Turkish-born pianist Seda Röder, an associate in Harvard’s Department of Music who commissioned the work for her new CD.

For many listeners, the beauty of works by composers such as Beethoven and Brahms lies in their harmonic chords and melodic themes. But even those classic masters experimented with dissonance, juxtaposing notes that seem to clash chromatically, and jar the listener’s ear.

Yet while many classical composers used the technique to heighten the sense of emotion and tension in a piece, they almost always chose to resolve the friction by restoring harmony.

But sustained dissonance was a natural and important progression in the Western musical canon and carries its own beauty, said Röder, who recently released “Listening to Istanbul,” a collection of six contemporary Turkish piano pieces full of disharmonious chords.

The CD was the result of an encounter between Röder and Tolga Yayalar, a Ph.D. candidate in the Department of Music. After attending one of Röder’s performances with the Harvard Group for New Music (HGNM) in 2008, Yayalar approached the pianist and asked if he could compose a work specifically for her.

The piece, titled “In the Temporal Gardens,” premiered at Harvard last April during an HGNM concert. Based on a poem by Turkish poet Ahmet Hamdi Tanpinar, the composition inspired Röder to further explore the world of Turkish contemporary music.

“After that performance, I thought, not many people know much about Turkish music outside of Turkey, and they should,” said Röder, who studied at the State Conservatory in Istanbul and received her magister diploma, the equivalent of a doctor of musical arts degree, from the University Mozarteum in Austria.

Encouraged by Yayalar, Röder contacted five prominent contemporary composers in Turkey who agreed to write pieces for the accomplished pianist, all with a theme or connection related to her native country.

The result is a rich soundscape that includes an audio image of the frantic pace of rush hour in the nation’s capital, Istanbul, and a piece modeled after the traditional Turkish makams, or scales that use notes that fall between the conventional Western scales’ configuration of half steps.

“I feel a responsibility to share this music with the world — mirror it, reflect it to the people who may not even know that it exists,” said Röder.

Röder admits it is sometimes hard for listeners to warm quickly to contemporary music. Unlike many classic compositions that are well-known and contain familiar formal structures and harmonic progressions, contemporary works, she said, more often than not challenge the listener.

“I don’t think it’s fair to expect people to immediately grasp and understand the music that was just composed versus music they have been hearing for 300 years. New music requires new listening in order to be able to adjust.”

To help her audiences, Röder gives brief lectures prior to performing a new work to explain the compositions’ various layers.

“People often feel lost, and with my talks I try to give them a branch they can hold onto. I am trying to make contemporary music much more approachable for everyone.”

Röder came to Harvard in 2007 after conducting postdoctoral research at the University of Music and Performing Arts Munich to further her study of lesser-known, 20th century Viennese composers. Since arriving in Cambridge, she has also been drawn to thematic concert programs that tell a story about a time, a city, or a people.

“Listening to Istanbul” falls into that musical framework.

“There are a lot of elements that you will not find in the contemporary music of other countries because these composers are specifically making use of Turkish elements or making reference to Turkish life,” she said.

Furthering her exploration of contemporary music, Röder is working on an electro-acoustic composition that she plans to perform with one of Harvard’s student orchestras later this year. The piece, Beethoven’s Piano Concerto No. 5, will include Röder’s improvised version of the work’s first movement cadenza that will use a computer to alter the sound of the piano keys.

But purists shouldn’t cringe at the idea of tweaking a classic with a computer keyboard, argues Röder.

“It was very conventional that people in Beethoven’s time improvised during the cadenza in the style of their time. When I think about it now, I think one should also improvise in the style of his or her own time.”

Above all, Röder urges audiences of contemporary works simply to open up to the experience.

“Go with the music, and be open for those new sounds. Just close your eyes, and don’t worry about understanding.”