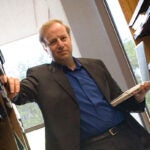 Saving thousands of lives and reducing health care costs might be a matter of just picking up the phone.

Harvard researchers have estimated the likely cost-effectiveness of post-discharge follow-up phone calls to smokers hospitalized with acute heart attacks. In a report in the Archives of Internal Medicine, the researchers suggest that phone calls to these discharged smokers encouraging them to quit would yield significant health and economic gains.

In their analysis, Ladapo and his colleagues considered the likely health and economic benefits gained when nurses phone survivors of acute myocardial infarction (AMI) five times over three months to encourage them to quit smoking.

“This is actually an enormous public heath care problem,” says Lapado of the more than 300,000 smokers hospitalized each year in the United States who survive AMI.

Smoking is a well-established yet preventable risk factor for heart disease, and Ladapo says most hospitals routinely provide in-hospital smoking cessation counseling to smokers with AMI.

But after these patients are discharged, few hospitals follow up on the patients’ smoking habits, even though studies have shown this contact can increase the number of patients who quit. Nonetheless, post-discharge smoking cessation follow-up is still uncommon, and is not considered a quality measure by Medicare, says Ladapo.

“Sadly, we know from previous studies that among the survivors, anywhere from 6 to 7 out of 10 of them will still be smoking a year later. And the ones who continue to smoke have much higher rates, not surprisingly, of recurrent heart attacks.

“So we decided to look at the problem differently.”

With data from a meta-analysis of randomized trials of smoking cessation interventions, Ladapo and his colleagues developed a statistical risk model to project the health and economic outcomes for a hypothetical U.S. cohort of 327,600 smokers who would be admitted for AMI to hospitals this year. The cohort size was the product of the 1.26 million U.S. patients with new or recurrent AMI each year and the reported prevalence of smokers (26 percent) among patients with AMI.

The researchers compared the projected 10-year effects of routine care (in-hospital smoking cessation advice) with more supportive care that coupled in-hospital advice with follow-up phone calls to patients after they were discharged.

Says Ladapo, “We found that if follow-up phone calls became the standard of care, then among the 300,000 plus smokers who are expected to have a heart attack in a given year, we would get 50,000 more smoking quitters the first year, prevent 1,400 heart attacks, and save about 8,000 lives.”

The researchers then calculated for the cohort the projected costs for their reduced hospitalizations, their added care and nonmedical expenditures because of increased longevity, and the subsequent reductions in productivity losses due to premature death. The researchers noted a “net positive value to society of $894 million,” with the program of follow-up intervention costing just $540 per quitter, and yielding a cost-effectiveness value of $5,050 per quality-adjusted life year.

Says Ladapo, “The added follow-up intervention is so simple. The nurse calls the patients, literally just picks up the phone and calls each of them five times after they are discharged. Yet we found that if these phone calls were made, if this simple intervention became the standard of care, it would be incredibly cost-effective, especially when you compare it to more expensive medicines and high-tech treatments.”

In the study’s conclusion, the researchers suggest that Medicare and other health insurers consider making follow-up phone calls for hospitalized smokers with AMI a quality measure they support.

“We have an example of an intervention that can easily be applied for smokers to get them to quit, and it’s not only effective for smoking cessation, but cost-effective,” says study co-author Milton C. Weinstein, the Henry J. Kaiser Professor of Health Policy and Management at the Harvard School of Public Health.

“It’s generally the case that almost anything a health professional can do to get someone to quit smoking is going to be worth the money if you can get them to quit.”

The study’s other authors are Farouc A. Jaffer of Harvard Medical School and the Cardiology Division at Massachusetts General Hospital, and Erika S. Froelicher of the Department of Epidemiology and Biostatistics at the School of Nursing at the University of California, San Francisco.