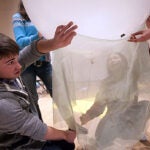 Raising the bar on disaster relief

The uprising in Tunisia has drawn the world’s attention, including words of support from President Obama in his State of the Union address. However, two Harvard experts on the region say it is still unclear whether the protests will lead to a truly democratic government or if another strongman will emerge to replace ousted president Zine el-Abidine Ben Ali.

Yet for the first time, there is debate on Tunisian TV, the Internet is uncensored, and “you can criticize the interim government openly on the streets,” said Malika Zeghal, the Prince Alwaleed Bin Talal Professor in Contemporary Islamic Thought and Life, during a panel talk, “Assessing Tunisia,” Jan. 26 at the Harvard Kennedy School.

Still, “It’s a little early to see if there will be a real regime change in the near future.”

Zeghal does not see a rise in radical Islam that would change Tunisia’s largely secular stance in politics and social structure. The massive demonstrations, covered by social media like Twitter and Facebook, show no ideological and Islamist slogans, she said.

The movement does show surprising political sophistication. “It doesn’t want to see an old regime in new clothing; it wants to see a new mode of governance,” she said.

Tunisia has been perceived as a stable and prosperous, if authoritarian regime, but protests against poor working conditions, corruption, and nepotism emerged in the phosphate mining areas of Gafsa in 2008. The protests, Zeghal said, were ruthlessly suppressed, but sowed the seeds for the discontent that spread in December when a young street merchant burned himself alive after being beaten by police. Ben Ali, who had ruled the country for 23 years, fled Jan. 14.

Protests were fueled by a sense of betrayal, said William Granara, Professor of the Practice of Arabic on the Gordon Gray Endowment, director of Modern Language Programs, and director of the Moroccan Studies Program.

Granara, who has visited Tunisia many times since 1982, said Ben Ali enjoyed unprecedented admiration when he took power in a bloodless coup in 1987. Over the years, even as evidence of corruption and suppression piled up, Tunisians remained loyal, willing to cut him slack due to the country’s economic growth and Ben Ali’s pledge to keep Islamists at bay, he said.

“Eventually he turned his country into a police state,” Granara said. Finally, the public rebelled, saying: “We don’t deserve this. Our allegiances are with you. Why all this corruption?”

“The rage that you see right now is as much the sense of betrayal of a people whose beloved president has turned on them,” he said.

What happens next?  “Things are changing every minute, every hour,” said Zeghal. Islamists “will probably come back into the political game. I don’t think people should be afraid of that.”

Even if Rachid Ghannouchi, the leader of Tunisia’s Islamic party, Ennahda, returns from exile, Zeghal does not see a shift to radical Islam. Ghannouchi, she noted, has pledged not to change the legal status quo.

“The question of rapidity is really fascinating,” Granara said. Both he and Zeghal speculated that external pressure from the French or American embassies or even from Ben Ali’s own party, seeking to stem the tide of protest, played a part in Ben Ali’s hasty departure.

While the outcome remains uncertain, “This is an extraordinary moment in the history of the Arab Middle East, [where] for the first time, a popular revolution ousts a dictator,” Zeghal said.

The discussion was sponsored by the Outreach Center at the Center for Middle Eastern Studies, the Middle East Initiative at the Harvard Kennedy School, and the Prince Alwaleed Bin Talal Islamic Studies Program.