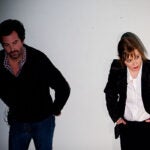 Author finds being inundated with data is centuries-old phenomenon

In her book, “Too Much to Know: Managing Scholarly Information Before the Modern Age,” Blair, Henry Charles Lea Professor of History, examines the painstaking processes early scholars undertook for the sake of knowledge.

With the spread of paper in the late middle ages, then of printing after 1453, scholarship involved ever more reading: printed books, manuscripts, and letters. Scholars relied on note taking to retain what was useful from their reading. Some collections of notes, organized with finding devices, were published as reference books, in which readers could find the best bits from many books they wouldn’t have the time or accessibility to read.

Blair set out to examine these early printed “reference books” — even though that term didn’t exist as such at the time, she notes — “to understand how they shaped readers’ practices of reading and conceptions of the organization of knowledge.”

“Too Much to Know” grew out of Blair’s first book, “The Theater of Nature: Jean Bodin and Renaissance Science,” which examined a single work of encyclopedic natural philosophy of 1596. The research extended over a decade, and took her to “many wonderful rare book libraries in France, Switzerland, Germany, the U.K., and of course at Houghton,” she said.

“One of the manuscripts I studied, a collection of unpublished medical remedies in the Zentralbibliothek in Zurich, can tell us a lot about how these large works were made. The pages that would have been sent to the printer were filled with slips of paper that were cut and pasted under headings” arranged by disease, said Blair.

That manuscript was a decoupage of “all kinds of texts: from manuscripts, including reading notes, personal observations …  and even from printed books written by others.” Other published compilations were made using similar methods, including one eight-volume behemoth containing more than 10 million words.

All research, in general, said Blair, “certainly was painstaking” for early modern scholars.

“They advocated studying at all times,” she said. “They worked by candlelight early in the morning, and deep into the night, sharpening quills by knife, and drying the ink afterward with a sprinkling of sand. Everything was written out by hand, and if you wanted to store information in more than one place, or include it in a letter, you had to copy it out that many times.”

Many scholars complained of damage to their eyes, and they “relied on letters to communicate with one another that could easily take weeks to get from one European city to another, and they constantly fretted about the mail not getting through at all.”

Blair notes that the challenges regarding information today are unprecedented in many ways — for example, in the scale of accumulation and its permeation of all areas of life. “But this book shows how earlier generations of scholars and students faced similar challenges of overload, with a similar range of despair and enthusiasm, in a quite different historical context,” she writes.

“They devised many thoughtful solutions, some of which are still familiar to us today and others that remind us that some of our working methods will no doubt seem strangely obsolete in due course, too.”