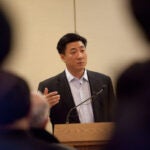 Quashing a voice, attacking a Nobel

In releasing more than 250,000 classified diplomatic cables last month, the Web-based organization WikiLeaks proved yet again its power to expose. But to put the vast trove of government secrets, ranging from the mundane to the life-threatening, into proper context, WikiLeaks founder Julian Assange still needed the traditional media.

It was just another case of strange journalistic bedfellows, which has become more common in recent years, said Bill Keller, executive editor of The New York Times, during a discussion on Thursday (Dec. 16). He said it proved that now more than ever traditional journalists have an important role to play in publishing government data in an effective and responsible way.

“WikiLeaks was a source. They were not a partner,” Keller told a crowd of reporters and editors from around the country at the Walter Lippmann House. As Times reporters and editors sifted through the cables, they shared valuable leads with the Guardian, the London-based newspaper that had direct access to the cables and first shared them with the Times. But, Keller said, “We had none of that give-and-take with WikiLeaks.”

In discussing the latest round of documents released by the nonprofit and controversial WikiLeaks, Keller offered an inside look at how the nation’s “newspaper of record” has contended with a wild, unruly web community dedicated to the notion that all information wants to be free. His keynote address was part of a daylong conference, “From Watergate to WikiLeaks: Secrecy and Journalism in the New Media Age,” sponsored by the Nieman Foundation for Journalism at Harvard.

Keller defended the Times’ decision to publish the diplomatic cables. Critics have argued that the information gleaned wasn’t newsworthy, that the leaks could have endangered informants, and that making use of WikiLeaks compromised the Times’ independence and impartiality, Keller said.

“I believe we have behaved responsibly,” he said. He said the Times worked closely with the Obama administration and its departments to prevent publishing information that might truly damage national security. As for the criticism that the cables weren’t important, he countered, “News generally works by advancing our knowledge by inches. For those that follow foreign policy, these documents provide nuance, texture, and drama.”

“I don’t regard Julian Assange as a kindred spirit,” Keller said. “If he’s a journalist, he’s not the kind of journalist that I am.”

But, he said, WikiLeaks has slowly adopted more traditional journalistic norms. The group has moved away from its “absolutist view” that prized transparency at any cost to one that values discretion, Keller said. For instance, WikiLeaks agreed to redact certain names in its most recent leak, after being criticized for putting individuals at risk when it leaked documents pertaining to the wars in Iraq and Afghanistan.

Although Keller acknowledged that the Times “could be more judicious in our use of anonymous sources,” he wholeheartedly defended the paper’s publishing of WikiLeaks documents.

“This coverage is not just something to defend as our constitutional right — it’s something to be celebrated as our obligation to the national good,” he said. The question of which government activities should be kept from the public “has blossomed into one of the most urgent political debates of our time, joining the question of how we protect ourselves to the question of what it is exactly that we are protecting.”

The day’s events included panels on international reporting and foreign government accountability, on the challenges of reporting on American state secrets, and on entrepreneurial solutions for investigative reporting.

The conference made a point of highlighting several new Web-based reporting tools, including Document Cloud, Basetrack, and the Sunlight Foundation. But most speakers agreed that while online tools can help journalists to access, process, and share data, they won’t take the place of traditional investigative reporting.

“You’ve got to get out and do the reporting,” said panelist David Kaplan, director of the International Consortium of Investigative Journalists. “Nothing replaces the careful craft of developing great sources, building trust, and observing firsthand what’s happening in this big, bad world.”

Kathleen Carroll, executive editor of the Associated Press (AP), said that the Web provides too loose of a network to determine real whistleblowers from conspiracy theorists and worthwhile secrets from “things we already know.”

“The increasingly lonely task of ferreting out secrets continues to fall primarily to [traditional] journalists … and to a few hardy folks who are applying good journalistic principles to their own self-publishing,” she said in the conference’s other keynote address. (She added that the AP was approached by WikiLeaks about its latest series of document leaks but declined to meet Assange’s terms for publishing the information.)

In reality, Carroll said, holding governments accountable requires reportorial manpower and financial resources. The AP alone filed 1,500 Freedom of Information Act requests last year and has spent many months and dollars in court trying to pry classified information from government hands, in an ongoing effort of the sort that dispersed, fly-by-night outfits like WikiLeaks would be hard-pressed to fight.

“It turns out that reporting is hard,” Carroll said.

Full videos and summaries of the conference’s panels and speeches can be found at the Nieman Center website.