The politics of ballparks 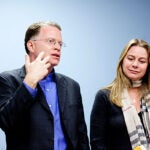 “Baseball is too much a sport to be a business and too much a business to be a sport,” Chicago baseball and chewing gum magnate William Wrigley Jr. once said of his beloved Cubs.

It’s a quotation that Larry Lucchino, president and chief executive officer of the Boston Red Sox, drops frequently, and with good reason. One doesn’t become commander of Red Sox Nation without a firm grasp on the balance of economic, political, civic, and even psychic weight the team carries in its hometown.

“It’s cliché to say we see ourselves as a public trust, but we do see ourselves as stewards to the city,” Lucchino told a crowd Tuesday (Dec. 7) at Harvard Kennedy School (HKS). Lucchino, a Yale-trained lawyer-turned-sports-management guru, has helped to push the idea of the American ballpark as civic focal point since the 1980s. His talk on “Ballparks, Politics, and Public Policy,” hosted by the Belfer Center for Science and International Affairs at HKS, drew on his experience navigating local and state politics to build and manage baseball stadiums.

Long before joining the Sox front office, Lucchino built a career on bringing the Fenway Park model to other cities. As president and CEO of the Baltimore Orioles, he oversaw the construction of Camden Yards, the modern template that opened in 1992. The intimate, old-fashioned park bucked the stadium design trends of the previous two decades that favored huge layouts, remote locations, and cheaper building materials.

Lucchino left the next year to become president of the San Diego Padres, where he led an uphill battle to build Petco Park, another traditional ballpark, in the heart of the city’s downtown.

After buying the Sox in February 2002, the management team and Lucchino campaigned to convince the public that Fenway, which the previous owners were hoping to replace, could be — and deserved to be — revitalized.

“It’s an iconic civic building,” he said of Fenway. “It’s a place where people have celebrated and suffered for decades.”

After several major renovations and additions, which included seats on the Green Monster, a roof deck in right field, and refurbished luxury boxes, Lucchino and company appear to have saved Fenway from an uncertain fate. The upgrades will be complete after $40 million more in improvements scheduled for 2011, he said.

Lucchino defied the common wisdom that “you can’t have a viable franchise with a stadium that holds 35,000, 37,000 people,” said moderator Graham Allison, director of the Belfer Center and the Kennedy School’s Douglas Dillon Professor of Government.

But convincing the baseball-loving (or worse, baseball-indifferent) public to adopt a grand, expensive vision requires political will, Lucchino emphasized to the crowd.

“Politics is part and parcel of every baseball team, but it is profoundly different” in different cities, Lucchino said.

In Baltimore, “the stars were in perfect alignment,” he said. City and state government pushed for a new ballpark, and public investment accounted for 96 percent of Camden Yards’ building costs.

In San Diego, however, Lucchino had to contend with what he called “litigious libertarians” who opposed public financing of the new park, as well as a city that had to some extent abandoned investment in its downtown. If his work in Baltimore was top-down, Lucchino said, his work in San Diego was bottom-up.

“You have to put the vision of the ballpark, literally and metaphorically, in front of the people before you discuss the financing,” he said. Building Petco Park involved “an enormously long runway of public debate” with business associations, neighborhood clubs, and other groups.

Lucchino defended the “small-d democracy” involved in building and renovating ballparks. From American business to popular culture, “There’s a death of regionalism going on right before our eyes,” he said. “But one thing that has remained local is politics.”

“Boston is in many ways the most political town I’ve ever worked in,” Lucchino continued. “I have to recognize the centrality of politics to everything I do.”

The event drew a more diverse crowd than the typical Kennedy School lecture populated by M.P.A. students and policy fellows. Lucchino fielded questions from Baltimore and San Diego fans in the audience, as well as one from a disgruntled New Yorker who wanted to know, “What was wrong with the old Yankee Stadium?”

“I thought the old Yankee Stadium was a sewer,” Lucchino said, adding, “The job they did [on the new stadium] shouldn’t be overlooked.”

The new ballpark was built to satisfy Yankees owner George Steinbrenner’s “Oedipus complex,” Lucchino said, and to cement his legacy with the franchise. It’s an easy trap for team owners to fall into, he cautioned.

“It’s not a popularity contest, but at times it feels like it is,” Lucchino said of running a team.

Paula Koczera, a program manager at Harvard Kennedy School and a Harvard Extension School student, and Jeffrey Moy, a member of the Harvard Square Business Association representing Hong Kong Restaurant, were both impressed by the talk.

“You don’t typically see speakers like this at the Kennedy School,” Koczera said.

“I think it’s fabulous to see him acknowledge that he’s a public figure” by discussing public policy, Moy said of Lucchino. “He’s one of those people who, probably without fully realizing it, has an ungodly amount of influence on what happens in Boston.”

The talk also helped bridge a gap between the two friends, both Massachusetts natives. Koczera, a faithful Fenway defender, was against building a new park even before the recent renovations, while Moy has long thought a new ballpark in Boston would spur economic growth.

“I’m slowly coming around,” Moy said after the event. “This definitely helped me think about the other side’s point of view.”