The outlook for Africa 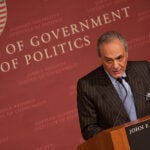 A friend in the Middle East

Over the course of Condoleezza Rice’s many trips to Africa, one indelible image — at a museum commemorating the roughly 800,000 people murdered in the 1994 Rwandan genocide — still haunts the former secretary of state.

“There was a note that had been found in the rubble, and it was from a little boy about 8 years old. And it said, ‘Don’t worry, the U.N. is coming,’ ” Rice recalled at the Harvard Kennedy School (HKS) on Tuesday (Nov. 30). “Well, of course, the U.N. never came.”

That era marked a low point in foreign policy toward Africa, she said, and indeed, much of Rice’s work in the region demonstrated her desire to re-engage with the often-struggling continent. In her talk, “The National Interest, Africa, and the African Diaspora: Does U.S. Foreign Policy Connect the Dots?” Rice argued that the United States’ continued involvement in African affairs is good for this country — and the American idea — as well.

Rice argued for an American foreign policy toward Africa that will promote internal and international stability, as well as the American ideal of democratic governance.

“America is both an idea and a superpower,” she said. “The ups and downs, the ins and outs of making those two strains in our foreign policy work together go very far back in our history.”

The event, co-sponsored by the W.E.B. Du Bois Institute for African and African American Research, was the first of three lectures Rice will give this week on the black experience in American foreign policy.

Rice’s talk drew on her varied experiences in academia and politics, from her graduate research on Cold War-era policies toward Africa to her time as a national security adviser and cabinet member in President George W. Bush’s administration. Rice is now a professor of political economy in the Stanford Graduate School of Business, a professor of political science at Stanford, and the Thomas and Barbara Stephenson Senior Fellow on Public Policy at the Stanford-affiliated Hoover Institution.

She described the evolution of America’s interaction with Africa. During the Cold War, aid to the continent was largely motivated by ideological and strategic competition with Africa’s other major benefactor, the Soviet Union. In the 1990s, without a Soviet foil in the region, “U.S. interests tended to lack clarity,” she said.

Rice and Bush had always intended to re-evaluate “the African agenda” after entering office, she said, but the 9/11 terrorist attacks heightened the sense of urgency.

“U.S. interests became redefined worldwide, not just around terrorism, but around the notion that we needed to have responsible sovereigns in the world,” Rice said. The Bush administration’s policies toward Africa were animated by the idea “that failed states were a danger, not just to themselves, but a danger to international stability.”

She highlighted the Bush administration’s successes, including a threefold increase in aid to Africa, increased funding for malaria and HIV/AIDS research, and the successful ousting of authoritarian leaders such as Charles Taylor, who presided over a brutal civil war in Liberia. One of the most promising trends on the continent, she said, was “the emergence of democratic leaders, mostly in small states, who were making a difference for their people” and who were willing to give up power peacefully.

Rice championed the United States’ “overt advocacy” of democracy to African nations over the past decade, adding that she didn’t believe that healthy civil societies would spring up on their own. “I’ve never understood how habits of democracy develop in authoritarian circumstances” without outside guidance, Rice said.

Still, she maintained a realist’s perspective on working with authoritarian leaders.

Rice also discussed the effects the global recession might have on African countries. Although Africa’s growth rates have remained stable, she said, she worries whether formerly wealthy Western nations will be able to provide “continued assistance to African governments that are doing the right thing.”

And while China has stepped up to support the continent, Rice questioned whether its “rather mercantilist” investment in Africa — designed to fuel China’s own growth and create more jobs for the Chinese, rather than to spur African economic development — is hurting Africa more than it helps.

Regardless, she said, it’s time for African nations to take responsibility for their continent’s successes and failures.

“It’s been a place of high potential for a really long time,” Rice said. “It’s important that that potential be realized.”

Rice will speak on “Multiethnic Democracy: Is the American Experience Unique?” on Wednesday (Dec. 1) and “Why Democracy Matters: Education, Empowerment, and the American National Myth at Home and Abroad” on Thursday (Dec. 2). Both events will be held from 4 to 5:30 p.m. in Askwith Hall in the Longfellow Building and are co-sponsored by the Harvard Graduate School of Education.