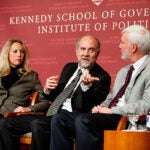 Four stories of dissent and consequence at Carr Center event

Lecture-goers were so intrigued last night (Dec. 2) by “The Razor’s Edge” that they stayed beyond the allotted time to try to get all their questions in. The talk, by four people who risked their careers and even their lives to stand up for principles they believed in, was sponsored by the Carr Center for Human Rights Policy and was the final event of a daylong conference on principled dissent.

First to speak was Col. Ann Wright, who resigned on the eve of the U.S. invasion of Iraq, stating that without the authorization of the U.N. Security Council, the war would be in violation of international law. Wright, who had been in the Army for almost three decades and had then served around the world in the diplomatic corps, was one of only three U.S. government officials to resign in protest to the Iraq war. “You never know when your conscience is going to get you,” she said.

Bakyt Beshimov had a very different story, having opposed the ruling body as leader of the Social Democratic Political Fraction in his native Kyrgyzstan. Beshimov’s liberal views and criticism toward two administrations led to detainment, interrogation, and ultimately to assassination attempts. “It was my dream to make my country better,” said the historian, later recalling the Oscar Wilde quote that the cynic knows the price of everything and the value of nothing. Beshimov, who sought asylum in the United States, is a Scholar at Risk at Harvard’s Davis Center for Russian and Eurasian Studies. “Last year I fled my country after the second attempt on my life,” he said. “Before me was just two ways: Stay and be killed, or leave.”

Darrel Vandeveld is a former military advocate who for a time prosecuted Guantanamo detainees. “My frame of mind was I wanted to secure as many convictions as possible,” he said, and make sure that the guilty received the maximum sentences, including the death penalty. “I was outraged, I was angry, I wanted revenge.” After seeing rampant abuses of the system, Vandeveld said, he resigned as a prosecutor and was “vilified” by the Army. He is now a defense attorney, standing up “for the rights of the poor and those unable to defend themselves.”

The final speaker was Carne Ross, who worked for the British Foreign Office, including serving as the U.K. delegation’s expert on the Middle East at the U.N. Security Council. He said he had a reputation as a “vicious Rottweiler” in defending his country’s policies until testifying in the British government’s Butler Review of 2004 that the U.S. and U.K. knew Iraq posed no threat to its neighbors and did not possess weapons of mass destruction.

“I couldn’t believe my government was doing this,” Ross said. He drafted letters of resignation but never sent them because “I was afraid. Afraid that if I held my hand up and said this isn’t right, somehow I would be crushed.” His fears were justified, it turned out, when another whistleblower, his friend and colleague David Kelly, was questioned aggressively regarding his decision to go to the press with what he knew, and later committed suicide.

“I realized that the government and the public in Britain were inoculated against the next person who put his hand up,” Ross said. “I wouldn’t be destroyed, because they had already destroyed David.”

He resigned, sending his evidence of government lies to the Foreign Office. “It took a long time to reconstruct a professional career for myself,” he said.

He ultimately founded an advisory group called Independent Diplomat, though he said he felt that he “did as much bad as I did good,” and warned against thinking of whistleblowers as heroes rather than human beings often at the mercy of “chance and circumstance.”

Much of the question-and-answer period focused on recent news regarding the website WikiLeaks and rape allegations made against its founder, Julian Assange. The panel was divided over whether the site was justified in releasing thousands of secret government documents, leaning toward the side of government by citing the need for secrecy in many cases and comparing WikiLeaks’ actions unfavorably with Daniel Ellsberg’s release of the Pentagon Papers in 1971. Ultimately, however, “the crucible of experience is the best teacher for making these kinds of decisions,” said Vandeveld.

Wright agreed. “Always second-guess,” she said. “Always be suspicious. Most of the time you kind of know right from wrong. It’s in your stomach. It’s in your headaches. Don’t dismiss those.”