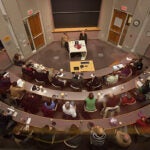 The politics of ballparks

Colombian political leader recounts her ordeal as a rebel captive

One moment she was stumping on the campaign trail, and the next she was a guerrilla hostage. Former Colombian presidential candidate Ingrid Betancourt described the physical and mental torment of spending more than six years in captivity during her remarks Wednesday (Dec. 8) at Harvard’s Center for Government and International Studies (CGIS).

Rescued by the Colombian army in 2008, it was apparent that the emotional wounds from her ordeal were still fresh as Betancourt discussed her struggles — with the guards, with other hostages, and within herself — that marked the slow passage of years in jungle deprivation.

Betancourt’s story was elicited through questions from History Professor Caroline Elkins, chair of the Committee on Ethnic Studies, which, along with the David Rockefeller Center for Latin American Studies, sponsored the event. Betancourt’s appearance followed the release of her account of the ordeal, “Even Silence has an End: My Six Years of Captivity in the Colombian Jungle.”

Betancourt was a presidential candidate in 2002 for Colombia’s Green Oxygen Party, traveling in territory where an armed guerrilla group, the Revolutionary Armed Forces of Columbia (FARC), was operating. After being denied the military escort she had been promised, Betancourt decided to push ahead and soon was captured at a FARC checkpoint.

“I was thrown, like the snap of a finger, from civilization to prehistoric living,” Betancourt said.

She was rescued along with several other hostages when Colombian army personnel disguised as FARC soldiers pretended they were taking the hostages to meet international humanitarian workers, loaded them on a helicopter, and flew them to freedom. Betancourt was very ill at the time and suffering from hepatitis.

Betancourt described the brutality of their teenage guards, but much of the hostages’ ire was directed not at the guards but at each other. Betancourt, who has been criticized by other hostages for her behavior, didn’t duck Elkins’ questions about the subject, saying the hostages couldn’t vent their frustration and anger on the guards — who could shoot them — and so turned on each other.

Elkins, who reviewed Betancourt’s book for The New York Times in September, observed that Betancourt’s account deals not only with what happened, but also with her internal struggle during that time. Elkins said the book was not only an account of self-discovery but also a “devastating self-critique.”

Betancourt, who drew a capacity crowd to the CGIS’s Tsai Auditorium, said writing the book was a kind of torture in itself. Each day, she had to sit down to write and return to the jungle, relive what happened to her, and confront her own behavior. During this process, Betancourt said, she struggled with whether she should leave out less-flattering incidents, but once having written them down, elected to leave them in. The process, she said, was a way for her to tell her family what happened, something she was unable to do talking to them after her rescue.

Betancourt said she went through a process of forgiveness, first for herself and then for others.

Though her internal journey took up a good portion of the discussion, she also recounted the physical deprivations and hardships, which were considerable. Hostages were pushed on forced marches further and further into the jungle. She was held with other hostages in close quarters, where the boredom and constant threat of violence kept them on each others’ nerves. They were never allowed to settle, and each morning had to pack up their belongings in case the army got too close and they had to flee. Each afternoon, they’d unpack again, whether they moved or not.

She was eventually kept at a makeshift prison camp with other hostages, including three American contractors, one of whom clashed repeatedly with her. The guards were changed periodically, and each time new guards arrived she observed a gradual but steady transition in their attitudes toward the prisoners, from kind to brutal, a transition she attributed to the effects of having total power over another.

Betancourt repeatedly tried to escape, but was captured and punished each time — chained by the neck to a tree after one attempt. She spoke of the relief she obtained from reading the Bible and said one kind guard taught her to weave a belt.

Through it all, Betancourt said, the memory of her children and family — her father died while she was in captivity — kept her going.

“My driving force was my love for my children,” Betancourt said.