Making sense of the truth 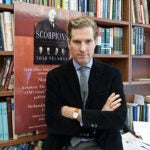 Philosopher probes how our sense of meaning works

Mark Richard has the look of a distinguished hipster, with spiky salt-and-pepper hair, edgy, green-framed spectacles, and an earring. Peeking over the top of his black leather boots are socks covered with little white martini glasses.

On a bookcase in his office, nestled between portraits of renowned logicians and philosophers Gottlob Frege and Kurt Gödel, is a handwritten set list from the American post-punk band Mission of Burma.

Aside from being a scholar on the philosophy of language, the New York native and Harvard professor of philosophy is an avid music fan. “I care a lot about music,” said Richard, fresh off a trip to see a movie about the band Magnetic Fields with his teenage daughter the previous evening.

Fittingly, one of Richard’s favorite songs by the indie pop group captures his take on the complexity of his work.

With a brooding voice, the band’s lead vocalist tells of a short-term relationship in the tune “Papa Was A Rodeo,” later revealing that the encounter evolved into a 55-year-long “romance of the century.” “As the song goes along you get this welling of emotion,” said Richard, “and then in the end it shifts perspective. … Brilliant.”

According to Richard, offering people a different point of view is the fundamental message of philosophy.

After a flirtation with physics at Hamilton College in New York, he switched to philosophy and went on to pursue a master’s and Ph.D. in the topic at the University of Massachusetts, Amherst. There, he realized the world was beginning to “digest” the research that had been done by a certain American linguist 20 years earlier.

“That’s where all the action was,” he said, of the nexus of noted linguist Noam Chomsky’s work on syntax that others later had extended to the question of semantics, the scholar Saul Kripke’s work on the philosophy of language and metaphysics, and the university’s “exciting” linguistics department.

“Through dumb luck, I was at a good place intellectually at a great time.”

Richard joined Tufts University as an assistant professor of philosophy in 1984, becoming associate professor in 1990, and professor in 1999. He was named the Lenore Stern Professor in the Humanities and Social Sciences at Tufts in 2007. He joined Harvard this fall.

“Meaning is what we use to represent the world to ourselves, how we are looking out on the world. But it’s also what connects you to the world, so now when you think about meaning, you are thinking about issues like truth represented in terms of what makes sentences accurate or inaccurate, true or false.”

Assessing every sentence with a true or false determination may not be the right approach, he argued in his 2008 book “When Truth Gives Out.”

In it, Richard offers examples of speech like racial slurs and epithets, vague language, and “cases where paradox looms,” and argues that such instances aren’t to be thought of in terms of truth and falsity. “If you think about these kinds of cases, it’s not clear that truth can play the central role that people think it’s required to play in explaining what meaning is.”

His work on truth and meaning underlies his thoughts on the broader discipline. Philosophy is vital not because it offers solutions, Richard contends, but because it offers alternate ways of looking at some of the world’s most pressing questions.

“To do philosophy is to appreciate that sometimes you have to step back and think about things in a different way.”

When not at Harvard, Richard spends time with his wife, Nancy Bauer, a professor of philosophy at Tufts, and their four children — his two teenagers, and hers, from prior marriages. He likes to cook and hike when he can, and he checks out the local music scene every chance he gets.