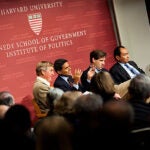 Students of literature often construct their understanding of a topic primarily from books and readings. But that’s not the case for students in Giuliana Minghelli’s new course on cultural migrations between Africa and Italy, where they have witnessed a performance by one of the assigned authors and have the opportunity to develop their own creative responses.

Minghelli, associate professor of Romance languages and literatures, found her interest in the subject piqued by her study of Italy’s early 20th century modernist writers. Many of them, she discovered, were either born in or had lived in Africa.

“People like Futurism founder Filippo Tommaso Marinetti chose Africa as the stage on which to perform the speed, modernity, action, and violence of his Futurist poetics,” Minghelli noted. “That is quite intriguing. Why Africa?”

On the one hand, she said, Africa represented a blank canvas onto which Italian writers could project their wildest fantasies. At the same time, the continent functioned as a land of exile and escape, initially from the fascist regime that controlled Italy in the decades leading up to World War II.

Later, in the 1960s, writers fled from the homogenization of capitalist consumer culture. For instance, author and film director Pier Paolo Pasolini traveled to Africa in search of an alternative, uncontaminated world.

Indeed, despite a desire on the part of many Italian authors to paint Africa as a primitive and exotic world, the continent is very close to Italy, perhaps uncomfortably so for many at the time. After the unification of Italy in 1861, Italians strove to present themselves as a thoroughly European culture, repressing what Minghelli calls “the Africa within Italy.”

Yet Italy also needed Africa, for economic reasons and because it was felt practicing colonialism would establish a stronger sense of national identity. The Italians were late to the “scramble for Africa,” waiting until 1936 — after the conquest of Eritrea, Somalia, and Ethiopia — to proclaim an official Italian Empire. The desire for conquest was buoyed by archaeological excavations in Africa that unearthed Roman ruins, which Italians used to link their colonizing activities to the glory of the Roman Empire.

“If you’re interested in the question of Italian nation-building and identity formation, Africa is really central,” Minghelli said.

She sees her new course, Italian 136: “Cultural Migrations Between Africa and Italy,” as an attempt to reconstruct a history that Italy itself has largely ignored. Despite the violence of the Italian intervention led by Mussolini — the 1935-36 war in Ethiopia was one of the bloodiest colonial wars ever — the Italians perpetuated an image of “Italiani brava gente” (“Italians are nice people”) that continues today.

According to this mythical historical narrative, the Italians were motivated not by dreams of military takeover but by an innocent, even laudable desire to build roads, hospitals, and schools in Africa. For years, the experience of colonialism was excluded from academic discourse. Perhaps for that reason, Minghelli says, some Italians still look back on the period with nostalgia, seeing it as “a beautiful adventure.”

“The real story of Italian colonialism is not a story that is being told in Italy,” Minghelli says. “It is a missed debate.”

Starting in the 1990s, however, Africans from colonized territories began writing about their experience immigrating to Italy, and Italian intellectuals such as Giorgio Agamben and Roberto Esposito began theorizing about the colonial subject.

One author who addresses the legacy of colonialism and the experience of immigration is Gabriella Ghermandi, who visited Harvard to perform and lend a personal dimension to the issues discussed in Minghelli’s course. Ghermandi, born in Ethiopia to an Italian father and an Ethiopian mother, wrote her debut novel, titled “Regina di fiori e di perle” (“Queen of Flowers and Pearls”), in 2007.

“I didn’t want my first novel to be autobiographical,” Ghermandi said. “Even if I had wanted to, it would have been impossible because what happened in those years is still a bleeding wound.”

Her performance, however, told the story of her own family, drawing on the African tradition of oral storytelling and weaving in Ethiopian songs in an attempt to untie “the knot of memory” and to recuperate and celebrate the past.

Born 25 years after the end of Italian colonialism, Ghermandi still confronted terrible racism growing up in Ethiopia, leading her mother to try to make her “more white.” When she arrived in Italy at age 14, however, she felt lost and out of place. It was only when she accepted that she was not Italian that she felt free to take pride in her Ethiopian heritage.

Meanwhile, the Italian language, which she calls her “father tongue,” became a “spatial home” for Ghermandi, in which she was able to come to terms with her physical and emotional journey.

At the end of her performance, Ghermandi encouraged audience members to share their own stories, which students will do via a creative project based on the stories they read. “Cultural Migrations Between Africa and Italy” will end with their staging a theatrical performance.

“This is no academic exercise,” Minghelli said, of coming to terms with the realities of Italian colonialism. “It’s something that needs to be done, and by doing this we will be able to recognize and traverse our post-colonial present.”