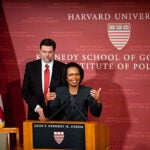 The outlook for Africa

New concepts that could benefit universities over next 40 years

What will higher education look like in 2050? That was the question addressed Tuesday night (Nov. 30) by Michael Crow, president of Arizona State University.

“We’re at the end of the fourth wave of change in higher education,” Crow began, arguing that research universities followed the initial establishment of higher education, public colleges, and land-grant schools in the timeline of America.

In less than a half-century, he said, global market competition will be at its fastest rates of change ever, with several multitrillion-dollar economies worldwide. According to a recent Pew Foundation projection, the nation’s population could reach 435 million, with a large percentage of those residents economically disadvantaged. In addition, climate change will be “meaningfully disruptive” in many parts of the world.

The everyday trends seen today, such as declining performance of students at all levels, particularly in math and science, and declining wages and employment among the less educated, will only continue, Crow maintained, and are, to say the least, not contributing to fulfilling the dream of meritocratic upward mobility, quality of life, sustainable environment, and longer life spans that most Americans share.

“How is it that we can have these great research universities and have negative-trending outcomes?” Crow said in a talk that was part of the Science and Democracy Lecture Series sponsored by the Harvard Kennedy School’s Program on Science, Technology & Society. “I hold the universities accountable. … We are part of the problem.”

Among the “things that we do that make the things that we teach less learnable,” Crow said, are the strict separation of disciplines, academic rigidity, and conservatism, the desire of universities to emulate schools at the top of the status hierarchy, and the lack of scalability that would allow a large number of students to be educated for a small amount of money.

Since 2002, when Crow took the helm at Arizona State — which he calls the “new American university” — he has led more than three dozen initiatives that aim to make the school “inclusive, scalable, fast, adaptive, challenge-focused, and willing to take risks.”

Among those initiatives were a restructuring of the engineering and life sciences schools to create more linkages between disciplines; the launch of the School of Earth and Space Exploration and the School of Sustainability; the start of a Teachers College to address K-12 performance and increase the status of the Education Department at the university; and broadened access, increasing the freshman class size by 42 percent and the enrollment of students living below the poverty line by 500 percent.

Universities must start, Crow noted, “by becoming self-reflective architects, figuring out what we have and what we actually need instead of what legend tells us we have to be.” Research universities today have “run their course,” he added. “Now is the time for variety.”

During that discussion, Crow clarified and expanded on some of his points. He discussed, for example, the school’s distance-learning program, which he feels can address issues of scalability without a loss of quality. “Nearly 40 percent of undergrads are taking at least one course online,” he said, which helps the school to keep costs down while advancing interactive learning technologies.

He said that Arizona State is working to increase the transfer and completion rates of community-college students, of whom only about 15 percent, historically, complete their later degrees. “We’ve built a system that will allow them to track into universities,” particularly where “culturally complex barriers” beyond finances impede even the most gifted students.