Hyman to step down as provost 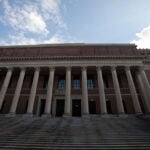 After decade in post, he will spend sabbatical year at Broad Institute

Steven E. Hyman, who spurred an expansion of interdisciplinary research at Harvard and has overseen the revitalization of the University’s libraries and many of its museums and cultural institutions, announced today (Dec. 15) that he would conclude his service as provost at the end of the academic year.

During nearly a decade in the post, Hyman put significant emphasis on intellectual activities that cross disciplines and School boundaries, and played a key role in founding major institutes and academic centers that forged new approaches to scientific research.

“Being Harvard provost is undoubtedly one of the greatest privileges in American higher education,” Hyman said. “Working with Harvard’s talented deans, faculty, and other University leaders, I have had an opportunity to nurture their high aspirations for some of the world’s greatest academic departments, professional Schools, museums, and libraries, as well as for their extraordinary students.”

Hyman, a neurobiologist and past director of the National Institute of Mental Health (NIMH), said he would take a one-year sabbatical at the Broad Institute of Harvard and Massachusetts Institute of Technology (MIT) to refocus on his academic work. He also plans to create an undergraduate course on the implications of neuroscience for ethics, policy, and law.

Harvard’s longest-serving provost in modern times, Hyman broadened the scope of the role through programmatic expansions that served all of the Schools, including the modernization of the University’s technology transfer programs, and the establishment of policies to support international research and collaborations.

“I have deeply valued my partnership with Steve,” said President Drew Faust. “He has spurred fresh thinking and important initiatives in areas ranging from the sciences to the humanities, from the museums to the libraries … In all of these areas and more, he has approached his role with intelligence, passion, and wit, and with a devotion to the highest academic standards.”

Faust said the search for a new provost would begin early next year.

“Steve has done an outstanding job as provost, especially in helping the University navigate a decade full of change and in creatively pursuing ways to make Harvard more than the sum of its parts,” said Robert D. Reischauer, senior fellow of the Harvard Corporation. “He’s contributed a great deal to the Corporation’s deliberations on a wide range of issues, and he’s consistently been a positive force for academic and organizational innovation. More than that, he’s been a pleasure to work with, and all of us on the Corporation join in thanking him for his leadership, his insight, and his dedication.”

Hyman oversaw the reorganization of the American Repertory Theater, supported the renovation of the Fogg Art Museum, and appointed the current directors of those two institutions, as well as the Arnold Arboretum and Villa I Tatti, Harvard’s Renaissance research center in Italy. He is currently leading the search for a new curator of the Nieman Foundation and, having overseen a review of the University’s vast library system, also is chairing the new Harvard Library Board that will establish a more closely coordinated management structure to strengthen Harvard’s position as the pre-eminent university library of the 21st century.

Hyman also worked to elevate the Harvard Humanities Center to the status of a University-wide center. “Steve Hyman is in many ways a Renaissance man, and I don’t use the term lightly,” said Homi Bhabha, director of the Mahindra Humanities Center and the Anne F. Rothenberg Professor of the Humanities, who noted that Hyman helped him to organize seminars that explored the intersection of the humanities and the sciences. “He has deep interests, of course, in the neurosciences and in the sciences more generally, but he is also very interested in the classics and in contemporary debates in the humanities.”

At a time when difficult questions were being asked about diversity in the ranks of Harvard’s faculty, Hyman established the Office of Faculty Development & Diversity, whose mission has been to improve the faculty experience while taking steps to ensure that the evolving faculty more closely reflects the increasing diversity of the student body.

“Steve’s background in medicine, his passion for the liberal arts, and his experience in leading the NIMH gave him the perfect set of skills to be an extraordinary provost,” said Harvard College Dean Evelynn Hammonds, who was the first vice provost for faculty development and diversity. “Steve never lost sight of the University’s goals and priorities. He’s been a wonderful mentor and friend to me.”

Many of Hyman’s most far-reaching accomplishments revolve around research and education in the sciences and engineering. He was integrally involved in elevating Harvard’s Division of Engineering to School status, and in founding such entrepreneurial and interdisciplinary ventures as the Wyss Institute for Biologically Inspired Engineering, a collaborative venture of Harvard Medical School (HMS), the School of Engineering and Applied Sciences, and the Faculty of Arts and Sciences; the Broad Institute, of MIT and Harvard, which takes a systematic, collaborative approach to genomics and the life sciences more generally to dramatically accelerate the treatment of disease; and the Ragon Institute of Massachusetts General Hospital, MIT, and Harvard, which supports nontraditional partnerships among experts to accelerate the search for an HIV/AIDS vaccine.

Gary Gottlieb, president and chief executive officer of Partners HealthCare, said Hyman had been “a visionary in creating a single campus for Harvard University.”

“His office has allowed the development of close collaboration among the hospitals and the HMS quadrangle faculty and the great scientists and teachers at the main campus of the University,” Gottlieb said. “He is passionate, brilliant scientifically, yet he’s a true physician who grew up in the hospitals. He really understands the great strength of all the parts of the University.”

Hyman established the Harvard University Science and Engineering Committee, which brings together faculty and deans from all of Harvard’s Schools that support science and engineering, along with leaders of the University-affiliated hospitals, to take an integrated approach toward priority setting and initiating new collaborative ventures. He played a key role in creating the Department of Stem Cell and Regenerative Biology, Harvard’s first cross-School department, and the Harvard Stem Cell Institute, which has been a world leader in the growing field of stem cell research.

“Steve Hyman has been a very strong voice for science and innovation at Harvard, working to support new structures for research and teaching within our community,” said Doug Melton, co-director of the Harvard Stem Cell Institute. “A notable success was his ability to foster and coordinate new research initiatives within Harvard, as well as making stronger connections with Harvard’s affiliated hospitals. I was delighted to learn that he is returning to experimental science for his next challenge, and look forward to watching his discoveries at Harvard.”