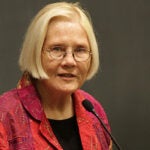 Incoming legislators attend HKS sessions on the top issues ahead

The campaign’s over. Time to govern.

The differences between the black-and-white rigors of an election campaign and the nuanced work of being an effective lawmaker were brought home to two dozen incoming congressmen this week, in the biennial Bipartisan Program for Newly Elected Members of Congress, held at Harvard’s John F. Kennedy School of Government.

Sixteen Republicans and eight Democrats spent four days at Harvard, getting to know future colleagues and listening to authorities on a variety of key topics on which they’ll soon be drafting legislation, debating, and voting.

Todd Young, a Republican who will represent Indiana’s 9th Congressional District, said he often attends conferences with the expectation that networking will be valuable but that little new will come from presentations. This time, he was pleasantly surprised not just at the quality of the discussions — often given by leaders in the fields — but also at the balance of perspectives, with conservative, moderate, and progressive viewpoints all in play.

The conference, which began Tuesday (Nov. 30) and ran through Friday, was the 19th such session organized by Harvard’s Institute of Politics (IOP). Christian Flynn, one of the event’s organizers, said bipartisanship is a key element of the session, which provides a venue for cross-aisle relationships and communications that can be scarce in Washington, D.C.

“This is the only place it happens,” Flynn said. “They don’t get that in Washington.”

Flynn said the conference is intended to give incoming lawmakers some background on key subjects — the economy, education, and foreign policy among them — that they’ll be dealing with in the years ahead. The speakers included Eliot University Professor Lawrence Summers, the former Obama and Clinton administration economic adviser and Harvard president, who spoke about the fiscal issues, trade, and North Korea, and who also offered pointers on how to get along in Washington. Continuing on that theme were three former White House chiefs of staff, who discussed how to work with the White House; former Secretary of State Condoleezza Rice, who discussed foreign policy; and an array of education experts, including former Bush Education Secretary Margaret Spellings, who talked about academic reform.

The education reform discussion, which was the only session open to the media, featured a frank, lively airing of the problems facing elementary and secondary schools. The panel, led by Harvard Graduate School of Education Dean Kathleen McCartney, featured Spellings, who is an IOP fellow this fall, former Washington, D.C., schools Chancellor Michelle Rhee, who aggressively moved to install reforms, and New York University Professor Pedro Noguera.

Much of the discussion centered on the national No Child Left Behind Act, passed in 2001. Despite the high-profile legislation’s emphasis on testing and improving underperforming schools, Rhee said that American education remains in crisis. U.S. students, she said, finish near the bottom of a list of 30 industrialized nations in academic achievement. Rhee identified the obstacles to getting rid of bad teachers as a key impediment to improving education.

None of the speakers disagreed with Rhee’s harsh assessment, but Spellings cautioned against reopening debate on No Child Left Behind, saying it would put a wide array of topics on the table, not all of which would be helpful. Several panelists said that success stories are out there that could be used as examples on how to improve struggling schools.

Billy Long, a Republican from Missouri’s 7th District, described the complexity of the problems highlighted in the sessions as “daunting.” He added that he wished more incoming legislators from his own party had attended. He said he has offered his services two years from now to spread the word among Republicans on the conference’s value.

Harvard President Drew Faust also addressed the group, reaching back into the nation’s contentious early days for lessons from President Thomas Jefferson. At the time of Jefferson’s inauguration, his Democratic-Republican Party was at odds with Alexander Hamilton’s Federalists, but Jefferson made a point in his inaugural address to stress the importance of working together. Faust quoted Jefferson: “We have called by different names brethren of the same principle. We are all Republicans, we are all Federalists.”

Faust said she hoped the legislators’ time at Harvard proves helpful as the new members seek common ground in addressing the major challenges the nation faces. Faust emphasized the role of higher education and university-based research in providing answers to many of the problems facing the world today, whether fighting illness, devising technological solutions for more efficient power, or providing expertise in dealing with other nations.

“I am hard-pressed to think about a single challenge we face which scientific research and other university-based expertise can’t help address,” Faust said, “and I hope you will call on us, not only in these times of such extraordinary challenge and change, but throughout your career in public office.”

Faust struck an optimistic note about the work of the incoming Congress, saying the new members’ presence at Harvard indicates their eagerness to learn, their openness to new ideas, and their willingness to listen to others.

“Your presence here makes me optimistic about what the 112th Congress can accomplish, and I am grateful for your service,” Faust said.